What an adventure! I went to visit my friend Alison for a week in Central America. She’s a teacher at an international school in Honduras, and her spring break was the perfect opportunity to visit!

There are so many more photos I wish I could’ve taken, but our time was short and we covered a lot of ground in a week. View my video on my Vimeo page HERE!

I arrived in San Pedro Sula, and was fingerprinted and photographed in customs. Standing in a crowd of people at the exit was a man holding a sign with my name on it. Alison had arranged for her friend Neré, (a driver for a lot of the foreign teachers) to pick me up and drive me to where she works. I know very little Spanish, and he knew very little English, but we introduced ourselves and then he called Alison so I could tell her I was on my way!

The short drive was a shock to the senses, full of new sights and smells. It was very hot and humid. People were selling fruit in stands along the road, motorcycles zipped between cars, and there were horse-drawn wagons carrying loads of wood. They use school buses for everything in Central America. They’re often used as public buses, and they’re decked out in artwork and lots of lights. We saw some with American school districts still painted on the side. And they usually have large pictures of Jesus on them, but I didn’t get the chance to ask why.

There were many police blockades, and guards in front of gates with very large guns. They’re outside of banks, rest stops, and gas stations. I never really got used to that. I never felt unsafe, just a bit uneasy.

We arrived at Alison’s school, and I got to see her classroom! It was fun to see all of her students’ artwork, although all of them were on break. I also got to meet Alison’s brother and sister, who would be traveling with us for the next week. We gave Alison some goodies (things that are hard to get in Honduras, like almond butter and Larabars), and headed to her friend’s house for lunch. 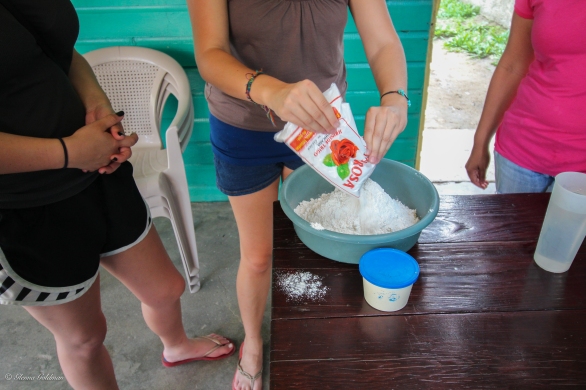 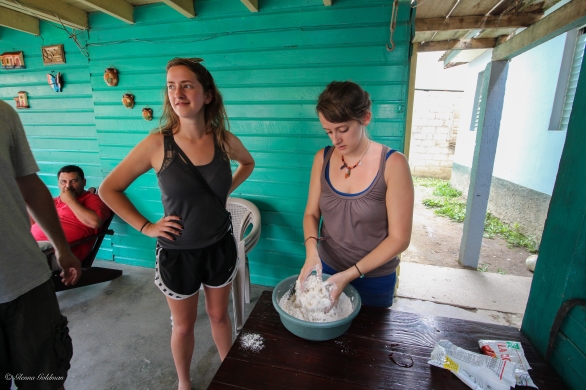 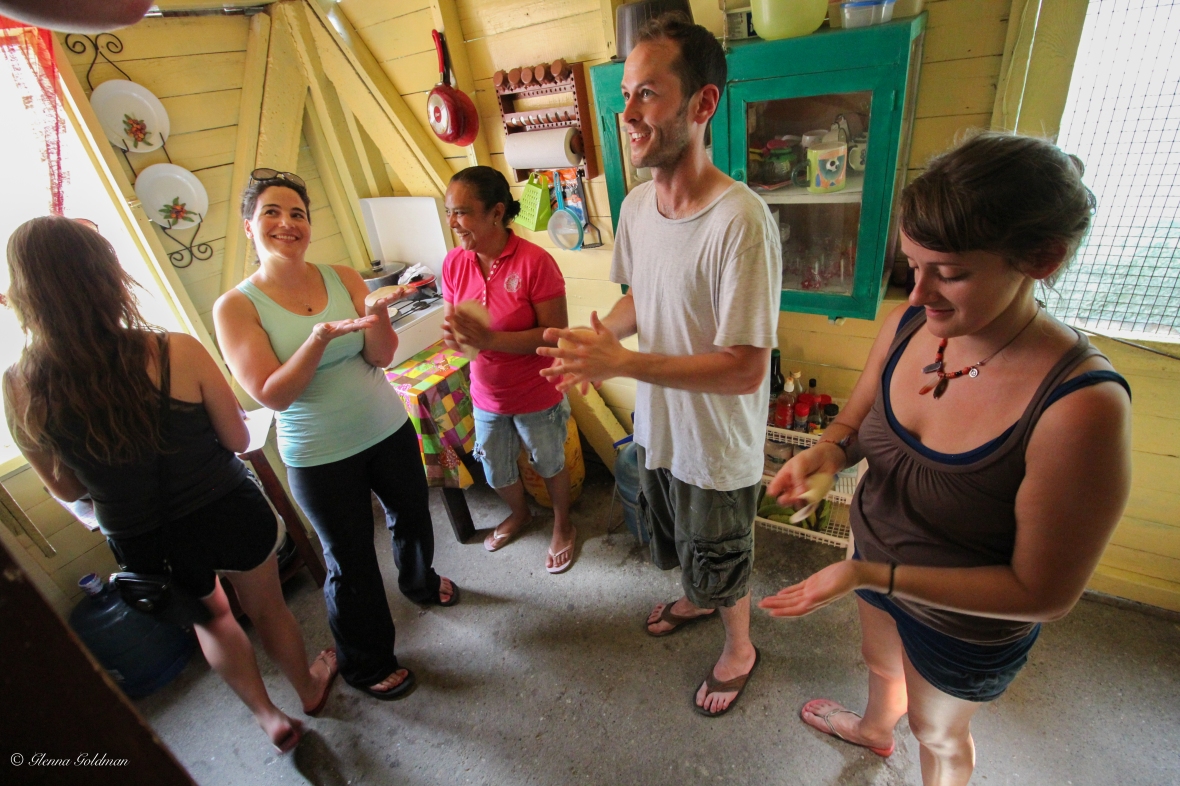 This house (and the surrounding ones in the neighborhood) used to be barracks for banana plantation workers. The workers would hang hammocks upstairs to sleep in, and hang out downstairs in the shade.

We stopped on the drive to La Ceiba for some fresh coconut. The woman selling them chopped the top off so we could drink the coconut milk, and then chopped them in half so we could eat the flesh. To me, it didn’t taste like much, but it was cool and refreshing.

Next stop, Sambo Creek! We were a bit worried about rain, but it cleared up as we got to the beach. We explored a bit while waiting for our ferry to the island. We (and our bags) got soaked on the ferry ride over to Los Cayos Cochinos! It wasn’t so much a ferry as a very small fishing boat.

We were taken to a smaller island, since we were staying the night. Our little hut had no electricity or running water, just beds. 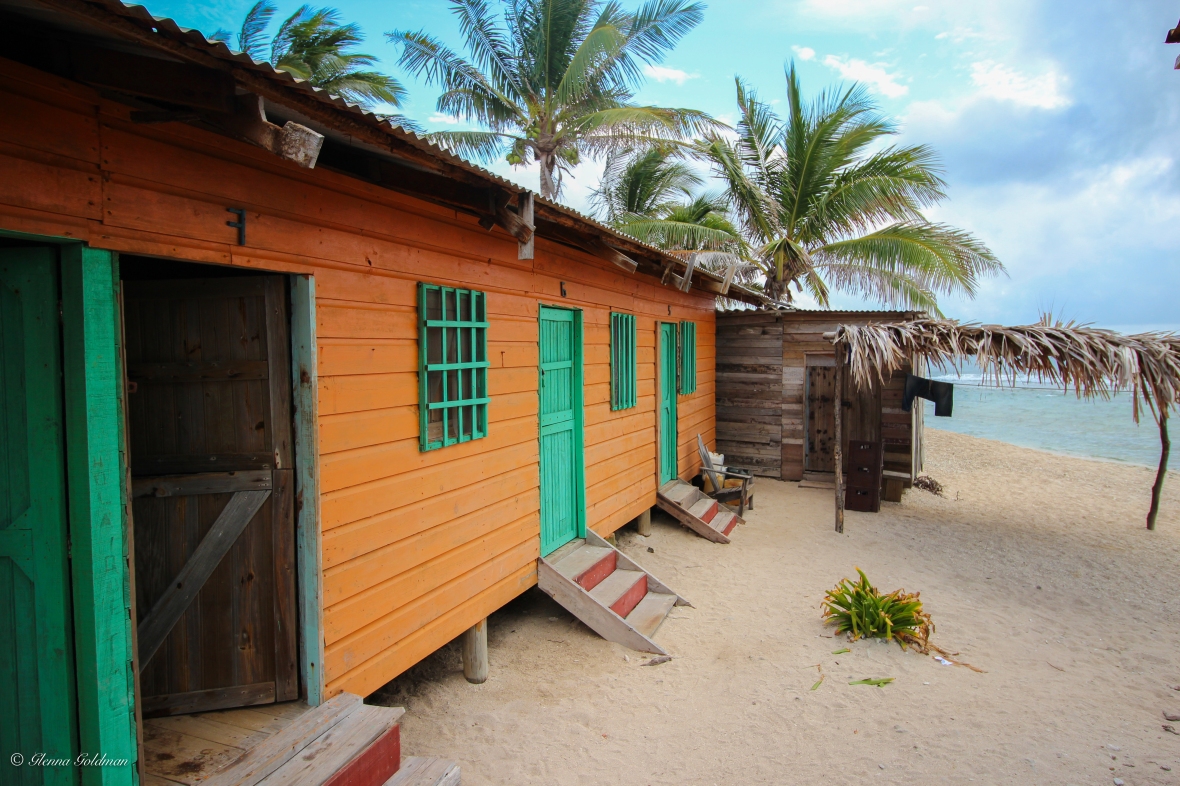 Time to explore the island! It was pretty small, and most of the other people on the island lived there. Very few tourists, but it seemed like they’re pretty used to foreigners.

The roofs are made from dried palm leaves, and the houses contain very little besides simple furniture.

We took a walk around the island, with gorgeous coral and blue skies all around. There were many fishing boats tied up in front of the main part of the island.

I found the biggest conch shell I have ever seen. It was so big I could barely lift it with one hand!

We had to be careful not to step on any of these spiky creatures, which were just below the water on the beach, about ten feet from our front door.

We crossed over to another island nearby to make use of their awesome dock! And we made a local friend. His Spanish was very hard to understand because he didn’t speak clearly, but he seemed to have a good time swimming with us. 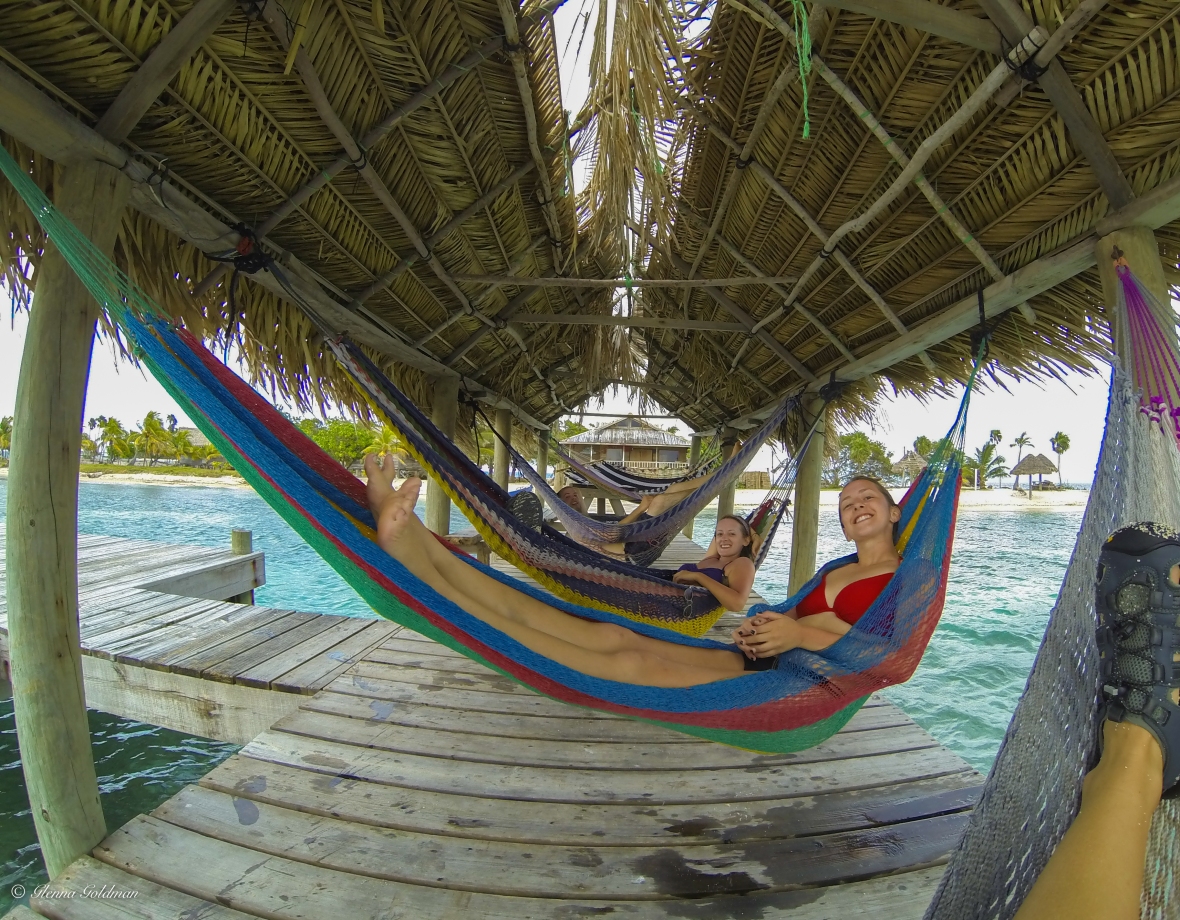 There was a little building on the island, where a local man served food at picnic tables. It was so simple, but delicious. Fish soup, rice and beans, and fried plantains are a very typical meal here. I won’t show you the close-up of the fish head…

We snorkeled, climbed trees with some local children, watched sunset on the beach, and then fell asleep to the sound of crashing waves. We were awakened by a downpour early in the morning. It sounded like the building was going to fall down! The metal roofs made the rain sound even louder.

After spending the night on the island, we swam a bit more, and then took the ferry back to Sambo Creek. Our driver didn’t show up at the rendezvous, so Alison called him only to find out that he was not able to pick us up. We took a taxi back to La Ceiba, and stayed in an awesome hostel that had only been open a few weeks. It was very spacious, and had tons of hammocks! The best part was the local artwork and chalkboard walls, so you could draw and leave notes. 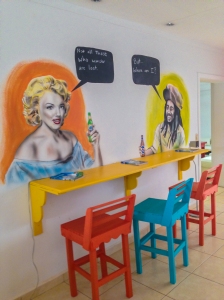 The owners took us to a little Honduran restaurant for dinner, where we tried anafres (bean dip with cheese or chorizo), chicharrón (fried pork rind, cabbage, and yucca), and ceviché. It was all delicious, and our hosts spoke English so we were able to discuss a lot about our countries.

After a night at the hostel, we grabbed some baleadas for breakfast, and then caught our ride to Nicaragua! It was just an old van, but it was much better than taking a public bus (which we did plenty of later). The ride normally takes about 12 hours, but ours was more like 17 due to some complications. We had lots of breaks at rest stops, so we had the opportunity to try some local junk food. We had to get stamped out of the country at the Honduran border, and then headed to the Nicaraguan border station.