We were stuck at the border for a bit because one of the vans had expired registration or something, so our new friends Griff and Ariel pulled out their light-up Frisbee! Automatic best friend status. We were at the border at about midnight, so there were only a few security guards and people selling food, but they seemed fascinated by the Frisbee game going on in the parking lot. We eventually got to our hostel around 1am, and I slept outside because it was actually cooler than our room.

The hostel was literally next to the beach. I slept under the overhang, in a hammock. 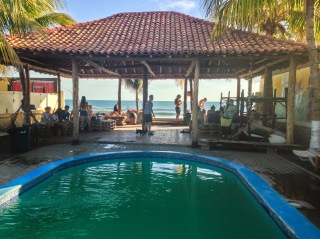 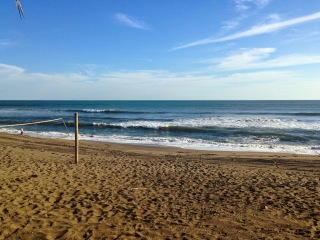 We had some trouble getting to Leon the next day (about a 20 minute drive), because the buses are fairly unreliable and we also had terrible timing. There aren’t any bus stops, you just wait by the side of the road. So eventually we hiked up to the highway and hitched a ride into town. It’s very acceptable to hitchhike there, and most pickups you see on the road have 4 or 5 people riding in the bed.

Central Leon was nice, full of fluttering purple banners and happy people. Everyone was shopping and eating, and it was a beautiful day. We ate at a little cafe and enjoyed the view. 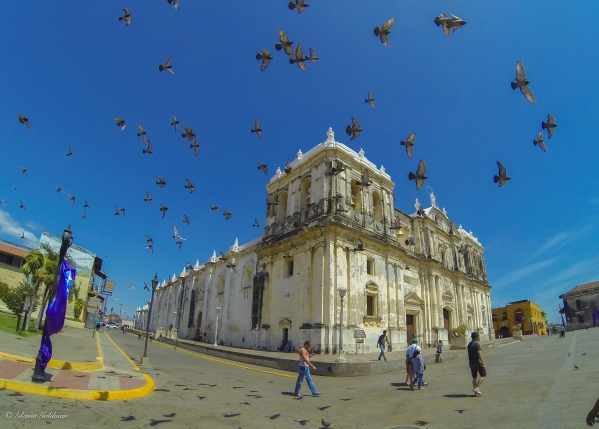 We spent the rest of the day hanging out, playing cards and Frisbee on the beach. 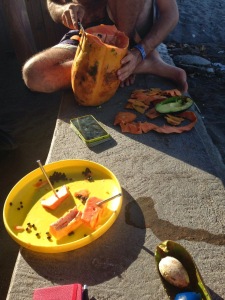 Griff shared his papaya with me! It’s kind of an acquired taste, because it’s not a very sweet fruit. We also had the biggest avocados I’ve ever seen!

After Leon, we headed to Granada. This time we took public transportation. The bus station was a madhouse! People were running around shouting, trying to get you to take their van or bus. Horse-drawn carts, taxis, and tuk-tuks (a 3-wheeled vehicle) were dropping off people and loads of stuff to transport to other cities. We were relieved to get to the peace and quiet of our final hostel. 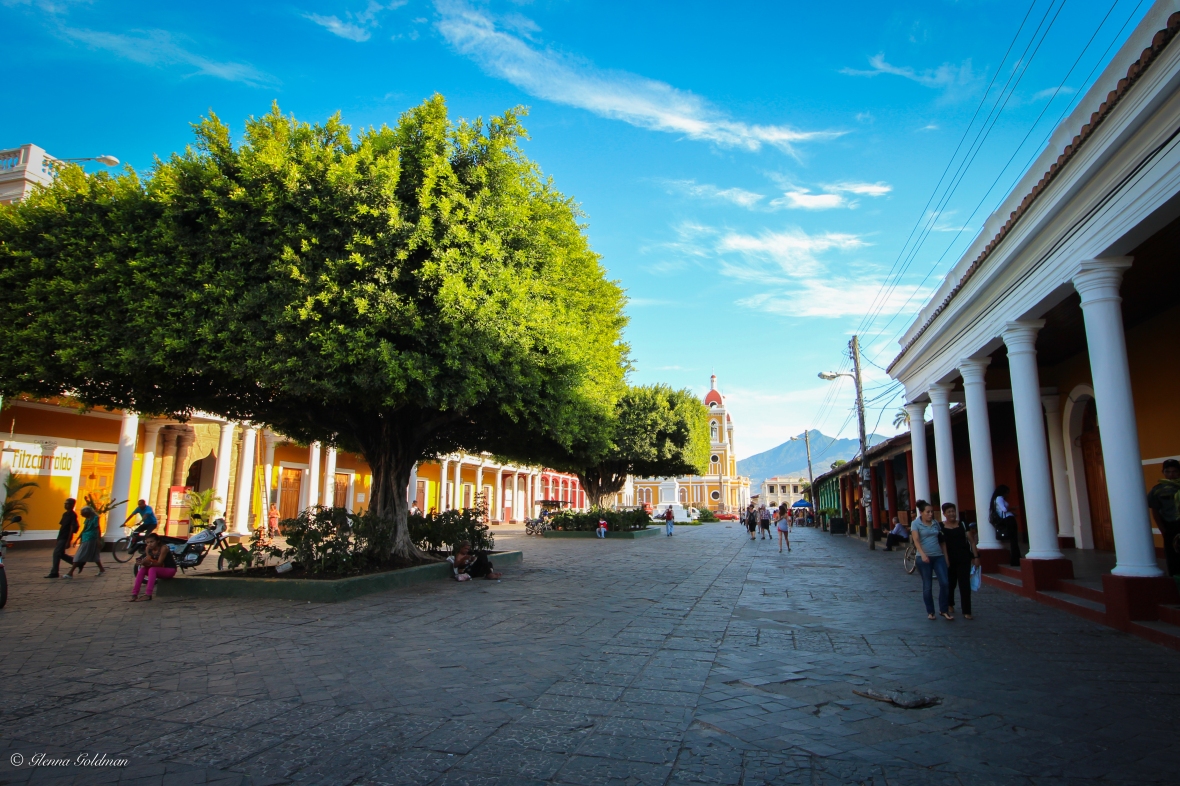 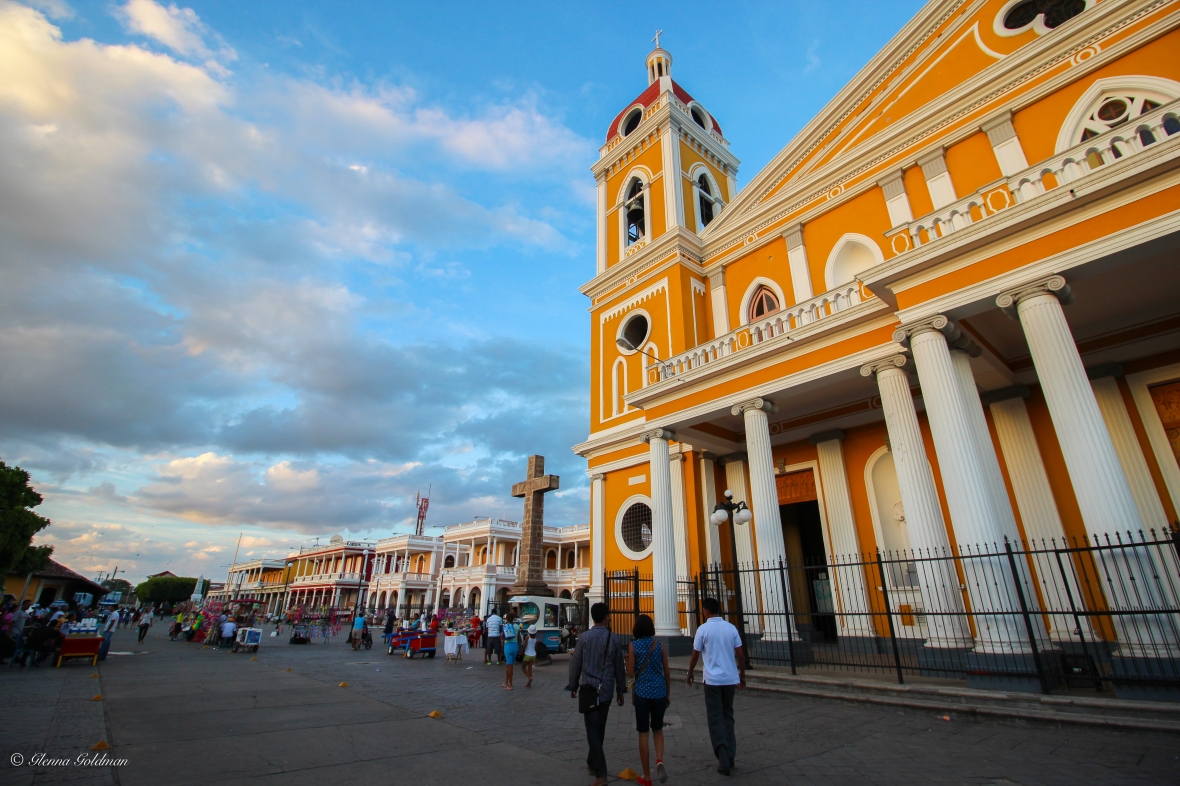 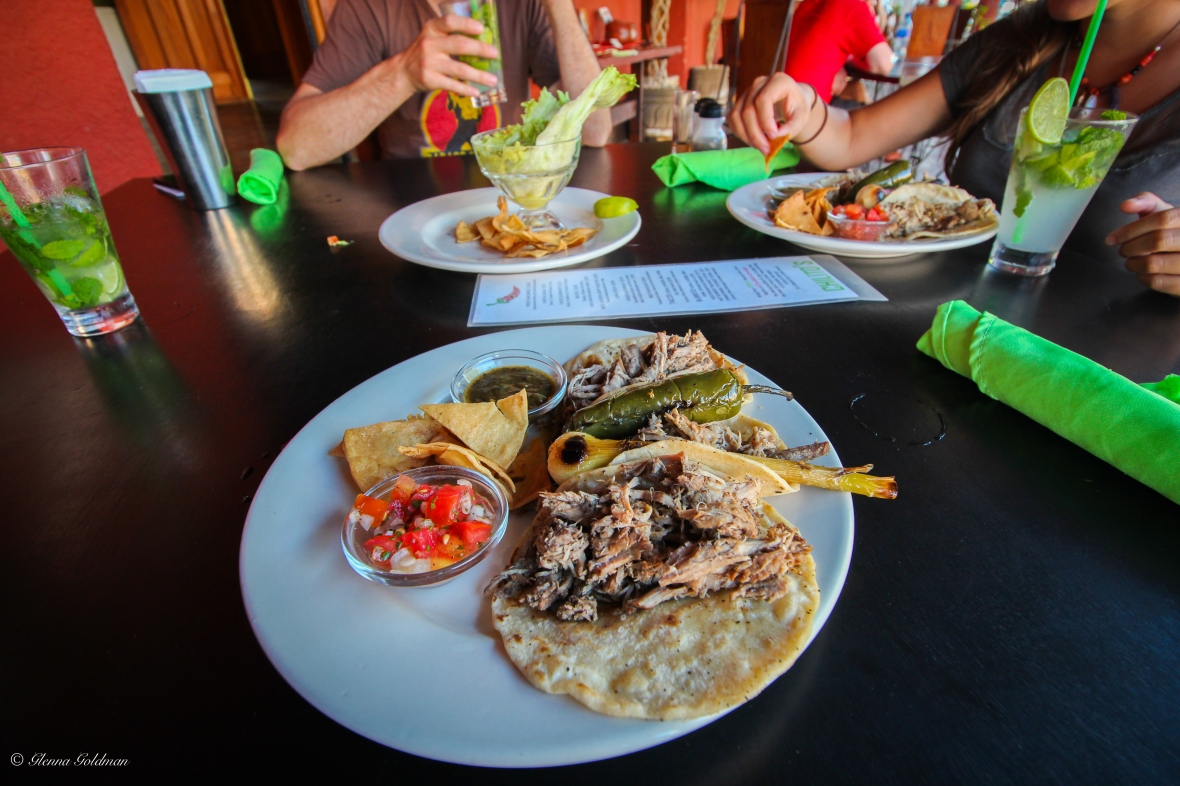 This place had great tacos, guacamole (not typical Honduran, but it was delicious), and mojitos!

We had originally planned on a night hike, but because of the Easter holiday (Semana Santa, aka Holy Week), the tour wasn’t running. Instead, we stumbled across some street performers, doing acrobatics and juggling fire! 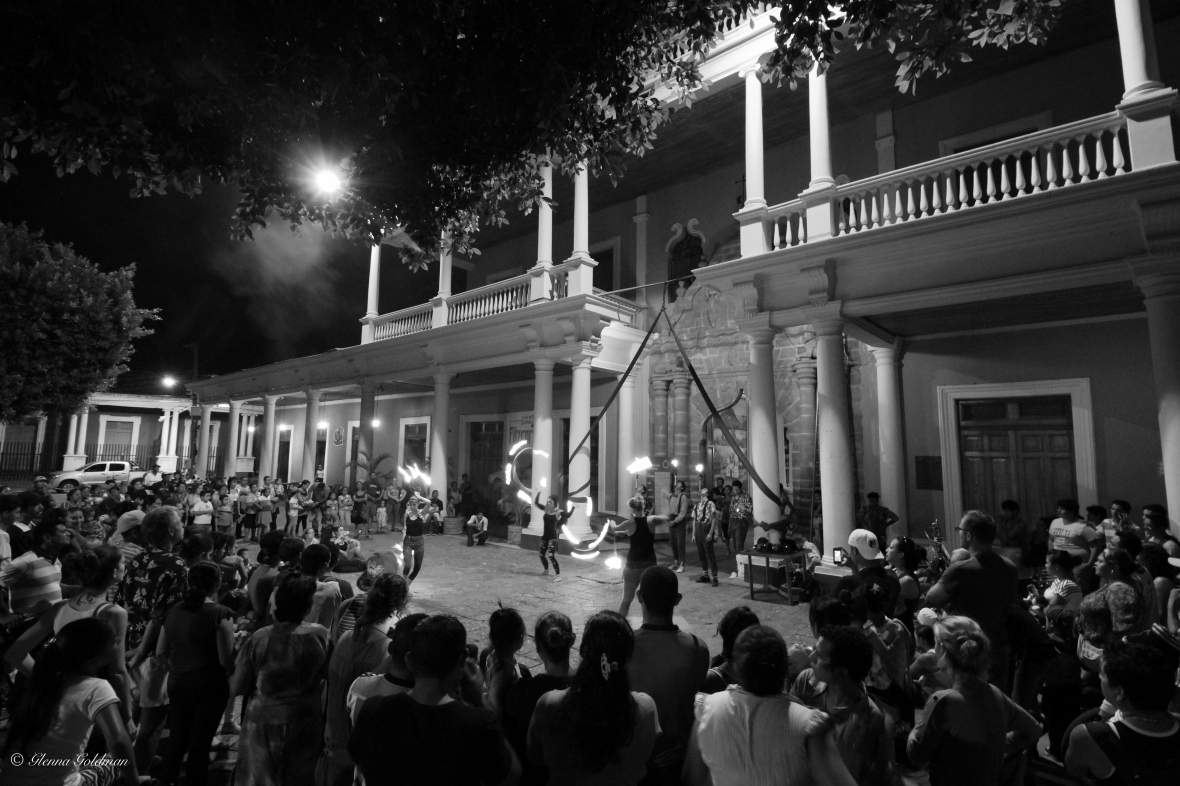 So we took a day trip to Masaya Volcano, part of Nicaragua’s first and largest national park. It has 2 volcanoes and 5 craters, and definitely smelled like sulphur! We went to the visitor’s center, and then drove up to the top. We looked down into the steaming caldera, and then hiked up for a better view. 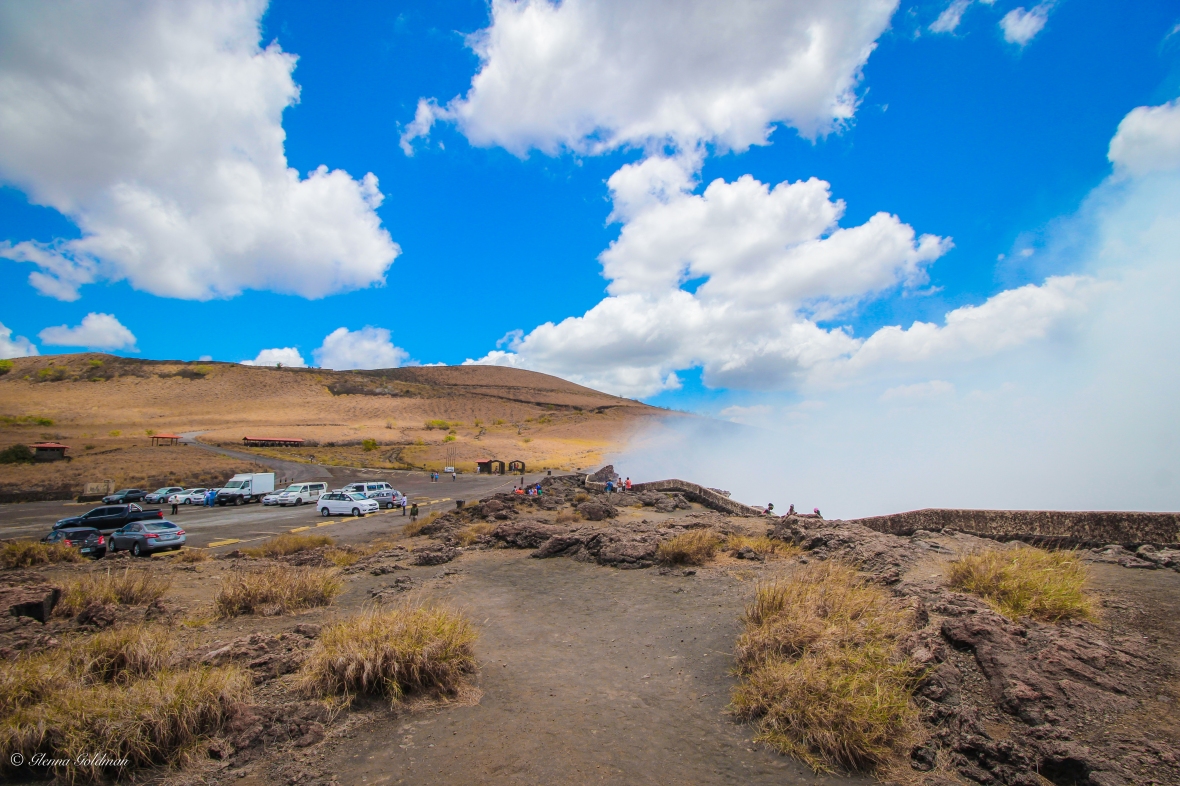 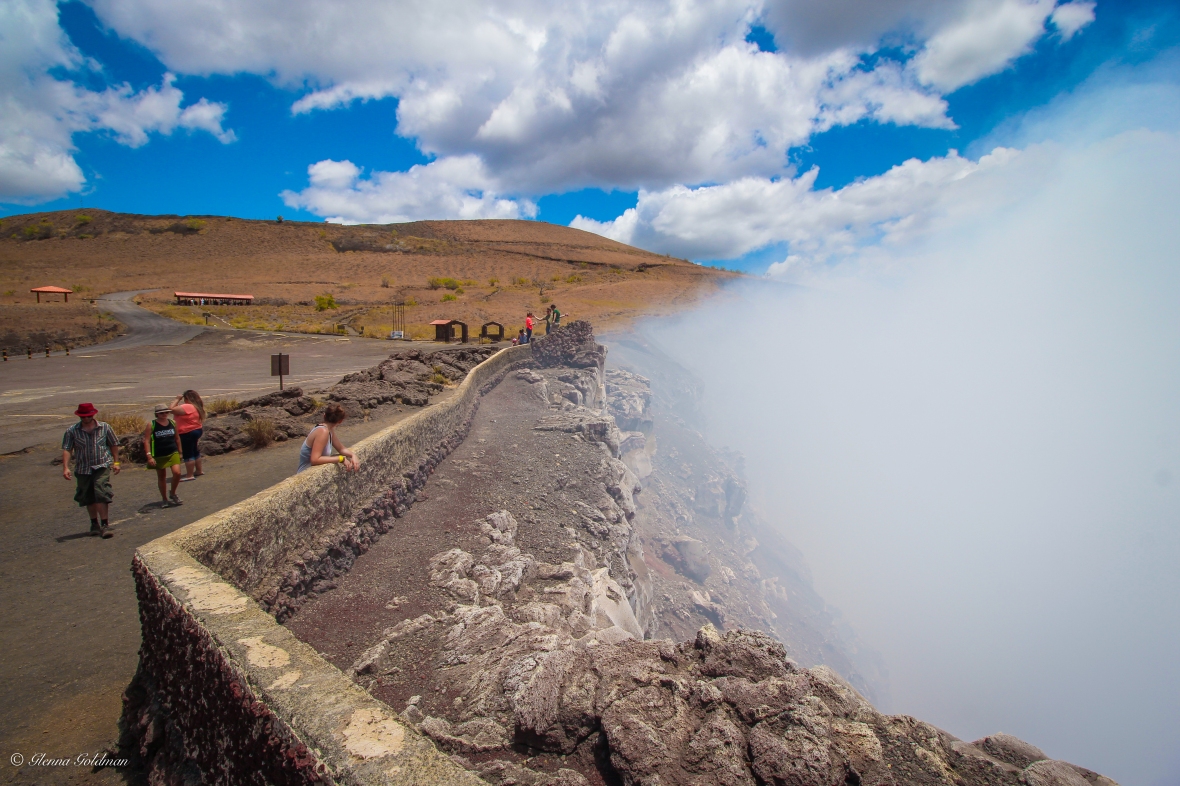 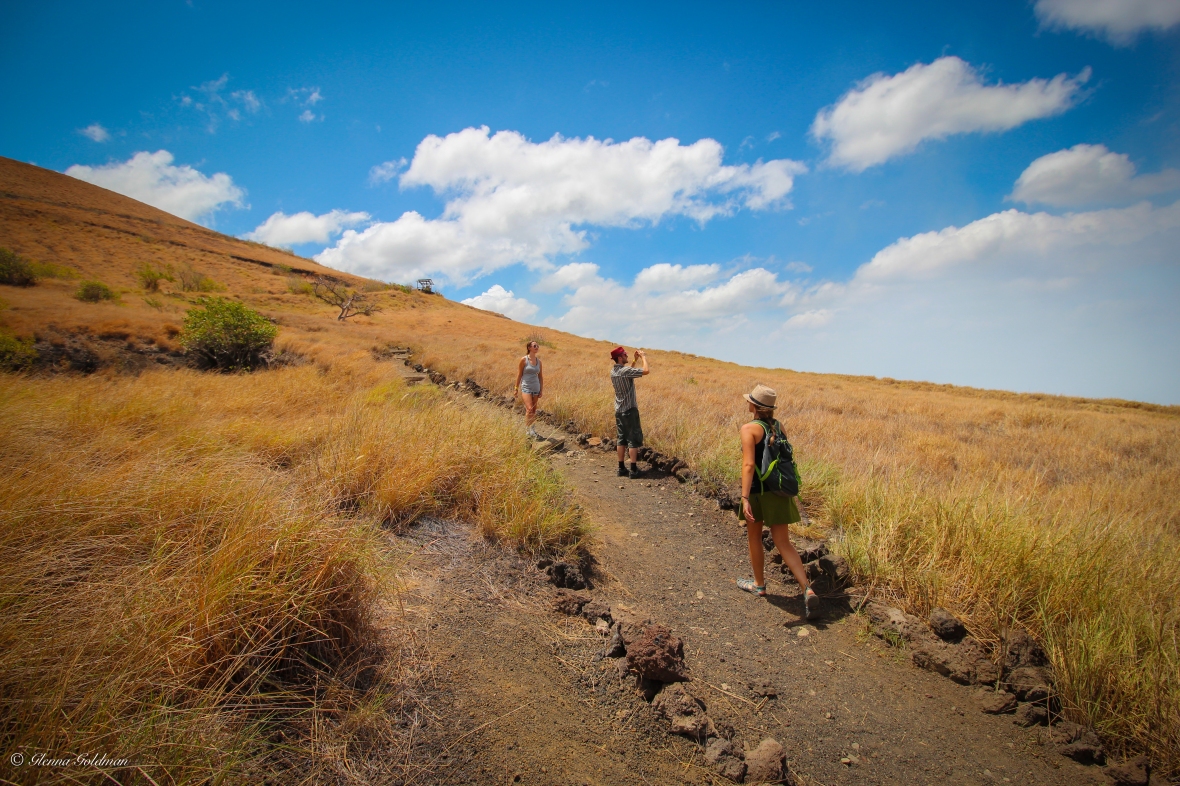 It was really windy up there! The caldera is to the left. 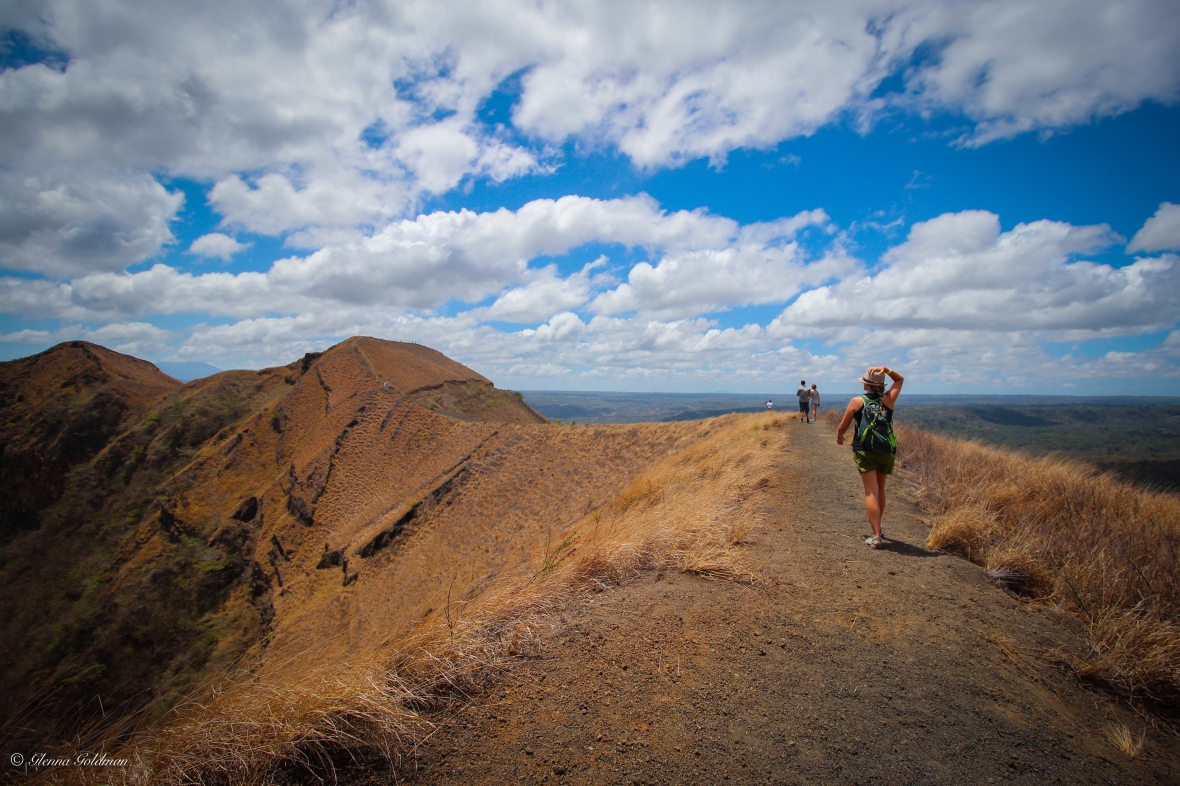 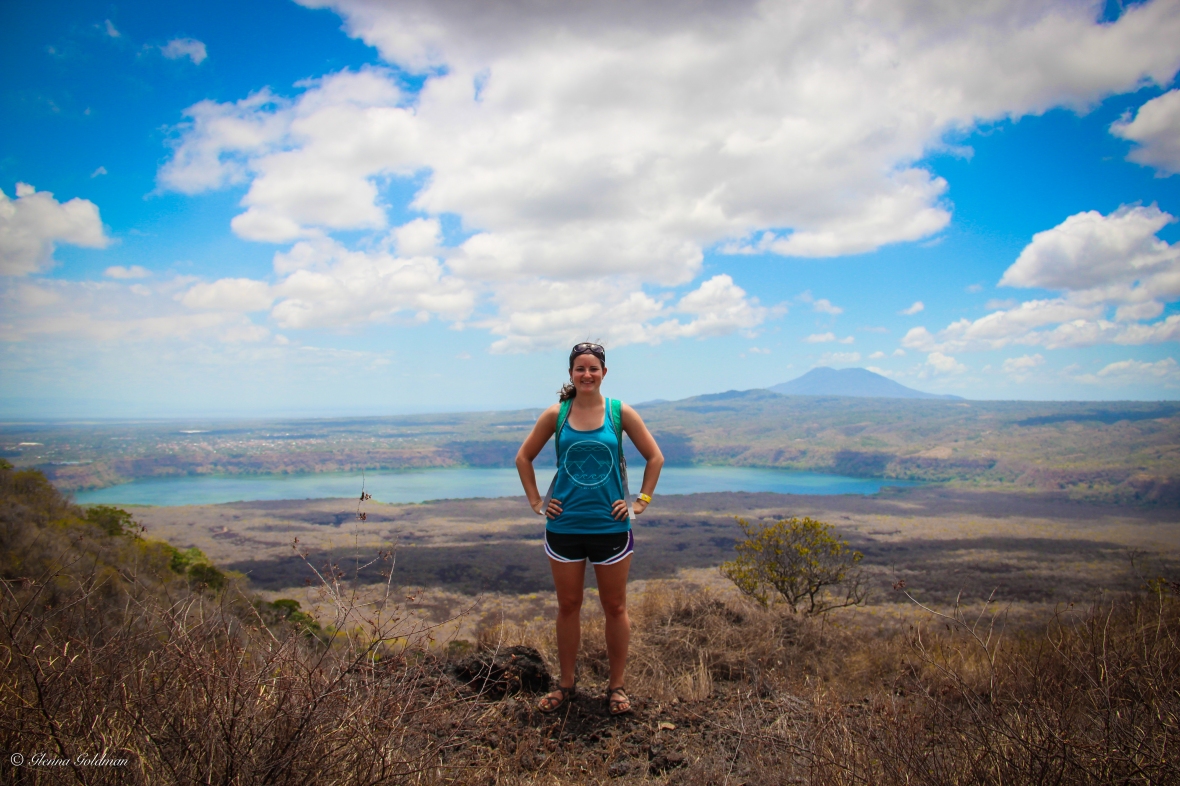 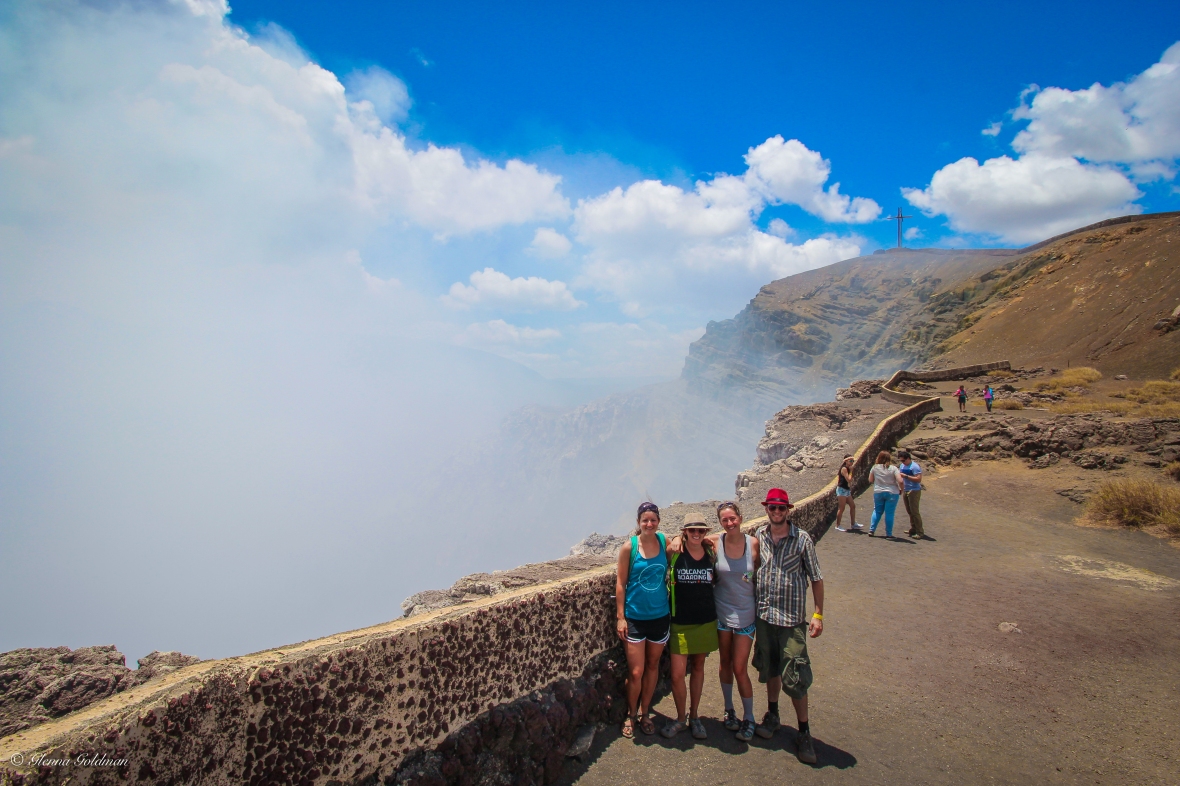 We spent the rest of our time exploring Granada. We met some expats who owned two restaurants and a hotel in town, and some people our age who were on a long-term mission trip. A different country every month for 11 months! Quite the adventure.

The next morning, the four of us had a final meal together before I took the shuttle to the airport in Managua. They had omelets and OJ, along with gallo pinto and plantains. We saw Jesus on the cross being paraded through the streets for Semana Santa (Holy Week), and there were some altars alongside the road on the drive to the airport. They’re not shy about their religion here. 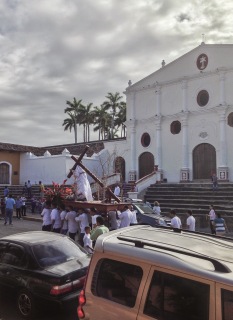 (Sorry, bad iPhone photo. We were caught by surprise!)

I was sad to say goodbye to Central America after just a week, but I’ll just have to come back to see more! Thanks so much to Alison for letting me come visit and planning out a great itinerary for our week, and to Nick and Lucy for being great travel buddies.

On to the next adventure! Cheers!