The Wanderlust… It hits hardest in winter. So when Jake found $130 flights (roundtrip!) to Cancun, of course we had to go. Luckily we had lots of points on our credit cards from our Eurotrip, and Mexico is  a fairly cheap place to go. Our hostels were as cheap as $12 a night, and the exchange rate was working heavily in our favor.

Jake was the travel mastermind, since he’d been to Mexico several times before. We originally planned to visit Merida, but nixed this in favor of more time on the coast. We’ll check out the other side of the Yucatan next time!

Our itinerary was as follows:

We left the day after a major snowstorm, luckily without delay. We were freezing while waiting for the parking lot shuttle, since we’d opted to leave our bulky coats in the car. Our 12:05am flight took off without a hitch, and we found Frontier to be comparable to any other airline, except for the teeny tiny food trays. We passed out for a good portion of the flight, jolted awake by the landing in Cancun. I could tell it was humid, as my hair had instantly transformed into a frizzball. We got Jake’s pack, took a taxi to the Hotel Zone, and passed out on the beach. It’s rough flying at midnight. We spent the remainder of the day exploring the many beaches, swimming, and playing volleyball.

We finished off the night by eating some traditional Mayan food and drinking lots of fruity drinks! We were also serenaded by a Mariachi band at the restaurant (best $5 we have ever spent). 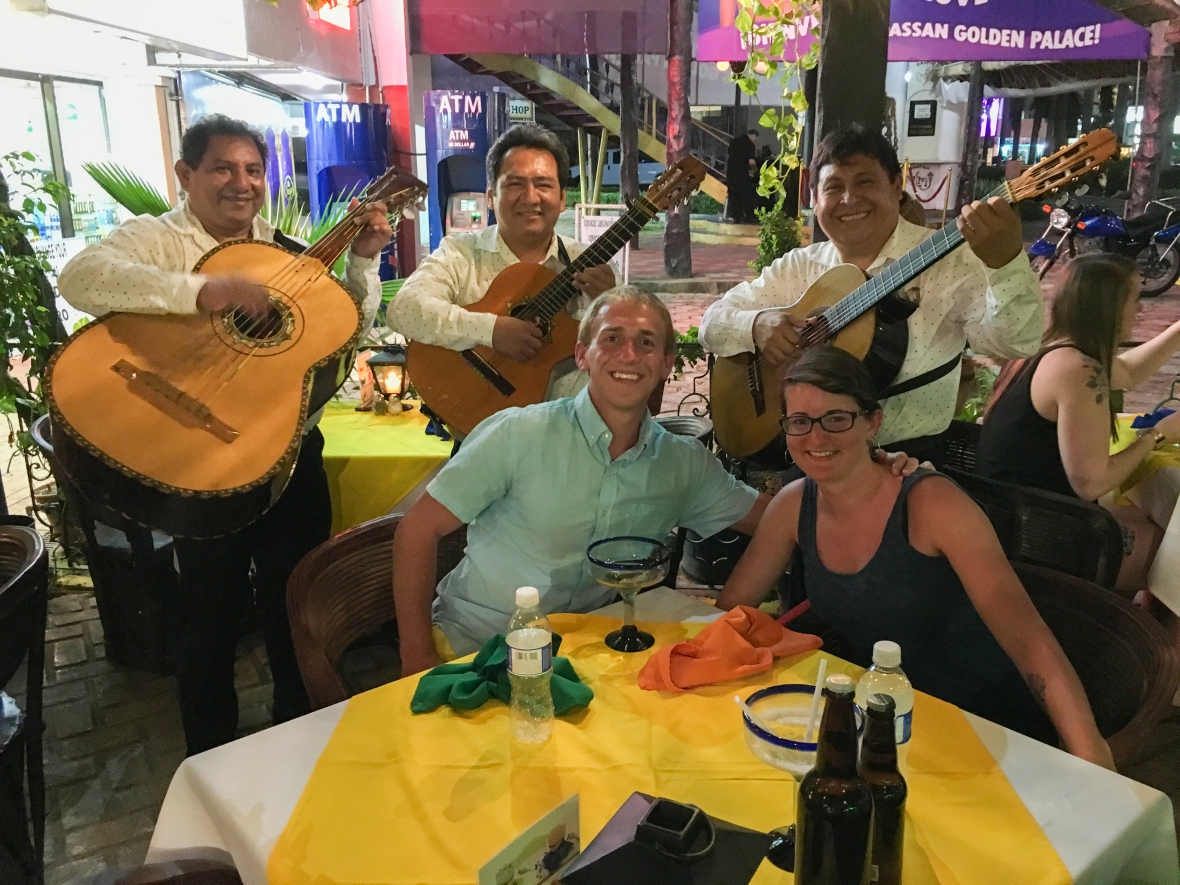 On day 2, we packed up and hoofed it to the ferry to Isla Mujeres.

We found our beach hostel, ditched our stuff, and grabbed a snorkel tour to the other end of the island. We began our boat tour with a few native Mexicans on vacation. We saw tropical fish and coral reefs, dove down to a little bit of the Museo, and had a delicious seafood dinner at a little island restaurant. 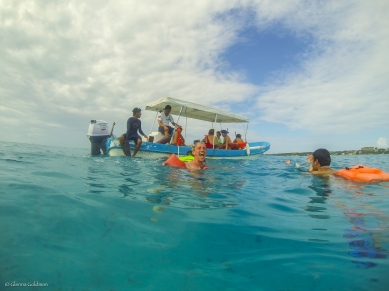 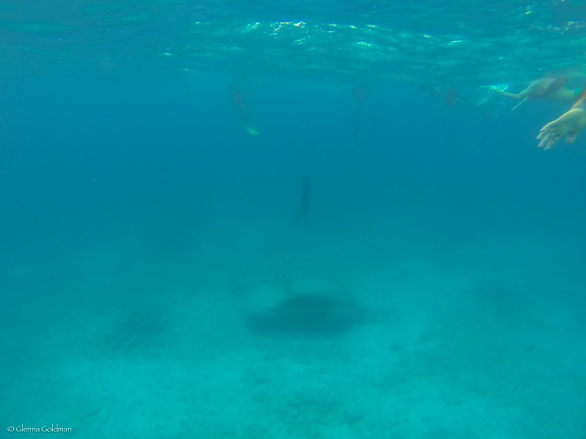 We snorkeled a bit more, and then enjoyed dinner with an Australian girl sharing our dorm room. She was on her way to Cuba, then to NYC! We tried to hang out on the beach that night, but a torrential downpour forced us back inside.

The next day we picked up our car rental and drove down to Playa del Carmen. Many people had recommended just taking the bus or a collectivo, sort of a communal taxi that just picks people up wherever. We wanted a bit more freedom of movement, plus the car was $3.50 a day (there was an additional cost for insurance, more on that later). It was a pleasant drive, with decent roads. The only major difference were the many topes (speed bumps), some of which had a policeman peering into the car and then waving us through.

We stopped along the way to check out Puerto Morales, and had some amazingly fresh guac and ceviche while looking out over the beach. The bartender climbed the tree next to the restaurant to get some fresh coconut milk for another customer. It’s another world down there, one I could definitely get used to.

In Playa del Carmen, we took a nap to recover from our massive sunburns sustained by laying on the beach for hours without sunscreen. Oops. Sometimes we forget we don’t live in a desert any more… Afterward we tried to find a decent beach bar, and failed. The streets seemed fairly empty, and it was only afterward that we realized everyone was at a concert for Carnival, a few blocks away from our hostel.

The next day we drove down to Akumal Beach to swim with turtles! We swam till it got too cloudy, and played volleyball with some people staying at a resort near the beach. 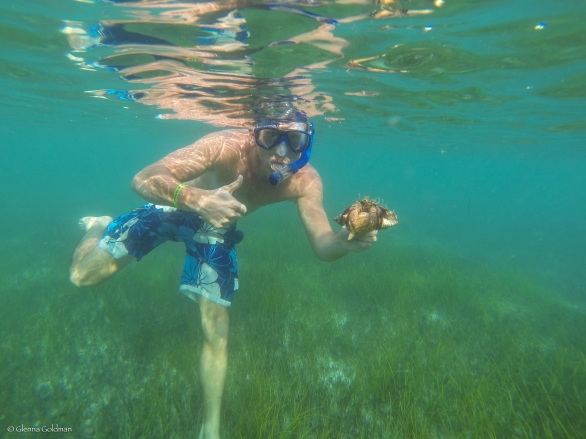 Finally, time for some ancient civilizations! We drove down to Tulum, and explored the ruins. 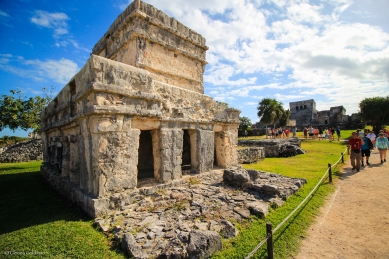 We also took advantage of our last chance to snorkel. It was a bit cloudy, and the reefs weren’t great in the area we swam in. We continued onward to Coba, stopping to swim in Gran Cenote on the way. This place was COOL! You could scuba dive down into the underground river. We didn’t shell out for that, but had fun swimming through the caverns with our snorkels, GoPro, and flashlights. 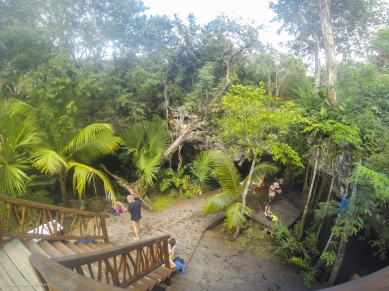 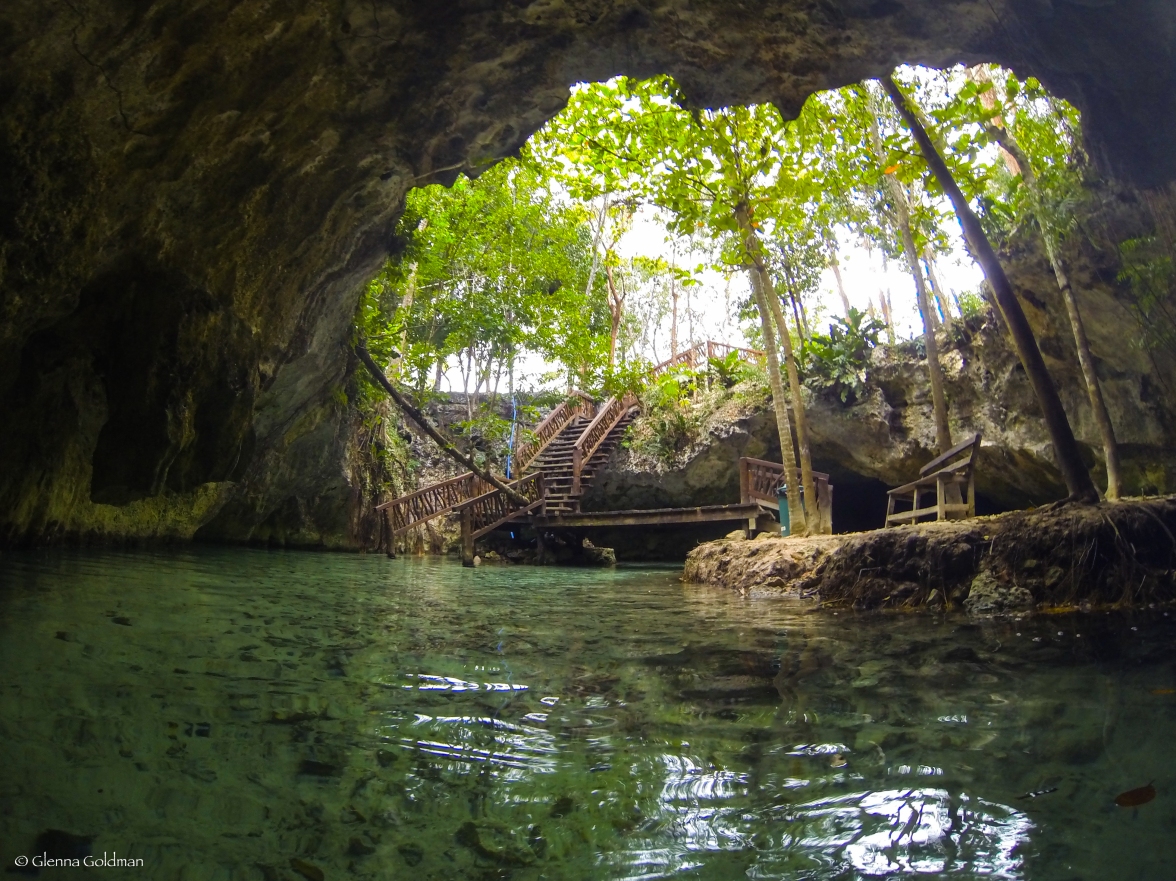 We missed the turn-off for Coba because of an extremely confusing roundabout, but made it just in time to sprint to Nohoch Mul (137 ft. and 120 very steep steps), which we hastily climbed up for a few photos. There are very few structures you are still allowed to climb, so we wanted to be sure we made it to this one! 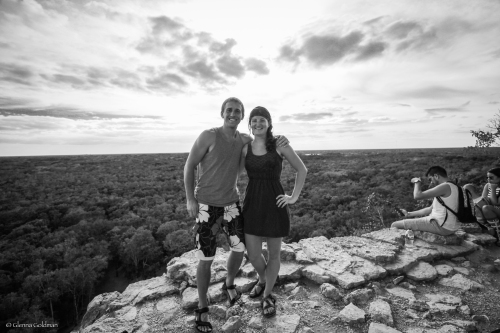 We made our way back to the entrance gate, exploring a ball court and a few other ruins along the way. We didn’t stop to eat here, because our guide book said there were alligators in the lagoon…

On to Valladolid, a little colonial town. Our hostel here was definitely not up to American standards, but it was cheap. We wandered around the main square, where people were awaiting… something. It appeared as though a Carnival parade was going to appear, but after an hour of waiting, we gave up.

For our last full day in Mexico, we headed to Chichen Itza. I was so glad Jake took me here. This place lived up to the hype. Despite the many booths of souvenir sellers lining the paths and the fact that you can no longer climb any of the ruins, it was spectacular. 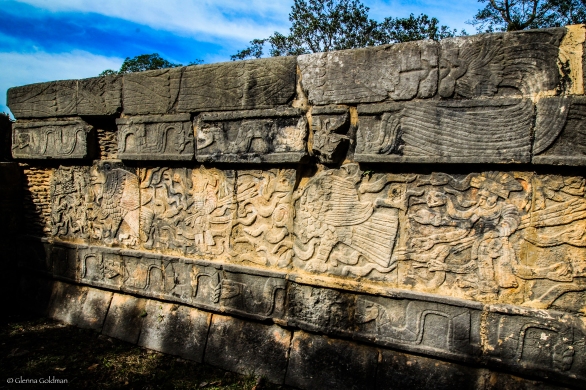 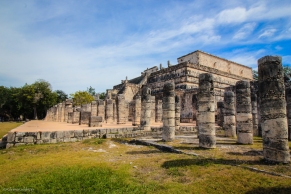 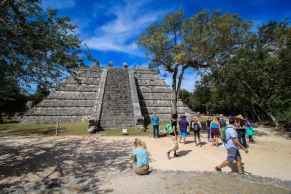 Imagining the bloodthirsty society that thrived here made me feel a bit like I was in Gladiator or something… The tales of ball courts, weird bird-snake-man sculptures, and cenotes full of bodies makes for a morbid yet fascinating visit. I would’ve loved to have visited when you could go inside the main temple and see the altar. A must-see when in this part of Mexico!

On the way back we stopped at a Mezcal distillery for a brief tour. It’s basically tequila, but can’t be called that because it’s not from the proper region of Mexico. The process is definitely much older than what we’re used to seeing in the States. When the agave reaches the proper maturity, the hearts or piñas are roasted for 3 days, crushed by a rolling stone wheel pulled by a pony or mule, left to ferment, and is distilled twice. The mezcal is then put into wooden barrels to age. We sampled a few different types, including dorado (golden), reposado (aged), and añejo. The last one we tried was aged for 6 years, and was unlike anything else I’ve tasted. It had a great smoky flavor.

We made our way back to Cancun, and the urban hustle and bustle that is the inner city. If you want peace and quiet, stick to the Hotel Zone. Our flight left early the next morning, and we were back to the States.

If you ever visit Cancun, please leave for at least a day. I feel a bit sorry for people who never leave their resort, because there is so much more to this area than drinking by the beach. I’d recommend at least visiting some ruins, and swimming in a cenote. Tours are endless, and they’ll pick you up from your hotel so you don’t even need to worry about finding transportation.

We felt out of place in Cancun’s Hotel Zone. Isla Mujeres was more our speed, with plenty of backpackers, and activities that didn’t cost a lot. Downtown Cancun was just like any other city, noisy and crowded.

Plan on using cash everywhere in Cancun and Playa. Oddly, places farther inland (including those towns that take about 30 seconds to drive through) took cards.

If you rent a car, book online. I booked our car with National for $3.50 a day, and it was more like $40 for a walk-in. Also, you can usually waive the insurance with your credit card coverage (I have Capital One) but in Mexico you have to buy 3rd Party Liability insurance, which added about $15/day on to our bill. I’d like to emphasize that we were never stopped by police, and never felt unsafe driving in Mexico. Sure, there are some crazy taxi drivers, but that’s universal.