After watching the second-to-last Game of Thrones episode in Cedar City, Utah, we headed to Zion! This was the park we were most looking forward to in Utah, and it also meant the completion of The Mighty Five.

We spent 4 days in Zion, because there’s a lot to do! After waiting ages to get a campsite in the park, we headed to the Visitor Center shuttle stop. We were shocked at the amount of people waiting to get on the bus. It resembled a theme park, with the line winding all the way around the building, literally hundreds of people. On one hand, it’s great to see so many people visiting the parks. On the other, it’s a bit frustrating to have to wait in line  behind people wearing flip flops and jeans, who obviously aren’t about to hike a 7 mile trail.

Instead of waiting, we hiked about a mile to the second shuttle stop, which had no line at all. We rode to the Observation Point trailhead. This steep, switchbacking trail led up to a point higher than Angel’s Landing. It was pretty hot, but worth it for the fantastic view of the valley.

We spent the rest of the day hanging out in the Virgin River, because it was 105 degrees. The river was a quick walk from our campground, and the water was perfect. When it got a bit cooler, we wandered over to the nearby movie theater and saw National Parks Adventure, an IMAX movie. It started out well, with some great shots of the parks, but the plot and actors fell flat, and it seemed to have a very abrupt ending. We were pretty disappointed, as we’d been looking forward to the movie for quite some time.

The next day we woke up bright and early to catch the first shuttle to Angels Landing. We knew the chain parts would be crowded later in the day, and we wanted to be among the first to climb to the top. The trail begins with a lot of switchbacks, and eventually pops out onto the top of a rocky outcropping. At this point it becomes more technical. There is a very narrow part of the outcropping with sheer cliffs on either side, but the chains are anchored well and there are plenty of spots to stop and rest if you need to. The hike wasn’t as scary as I had expected from seeing photos, but I would definitely not recommend this hike if you don’t like heights! 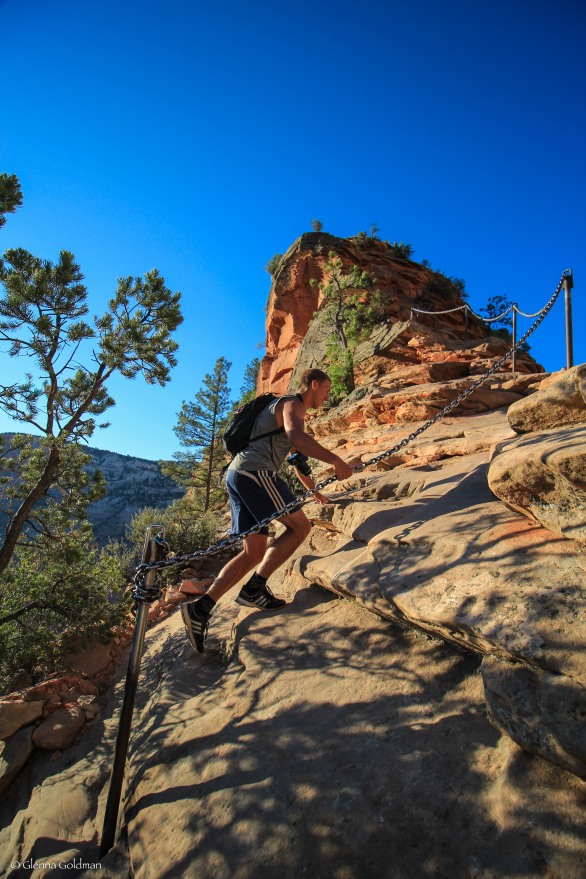 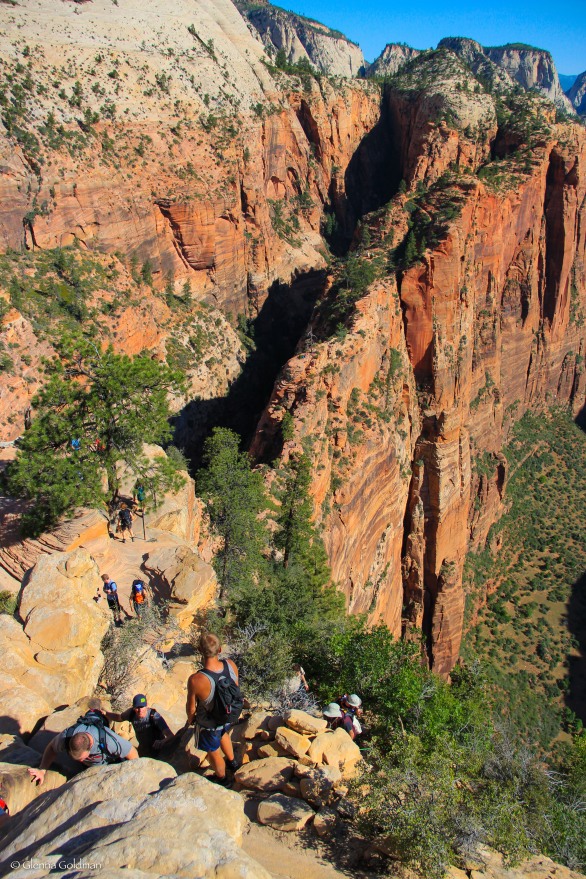 We hung out at the top for a bit, enjoying the view before the crowds began to arrive. We’d been following a couple the whole way up, and at the top we learned why they’d been so quick to the top. The guy was an ultrarunner, and the two of them were fellow travelers, about our age. We swapped stories about hiking in the US and Europe, and they gave us some pointers for doing the Via Ferrata in Italy, which is pretty high up on my next adventure list! It’s always great to meet other young adults driving across the country to hike some new trails.

If you make it to the top of Angel’s Landing, beware the chipmunks… They are so used to people that they’ll climb right into your open backpack in search of snacks, or in Jake’s case, onto your foot!

The chains were much more crowded on the way down, and we had to find ledges to wait on until the stream of people slowed enough for us to get past. After reaching the bottom, we walked down to the lodge for more great views of the valley, towering above the Virgin River. 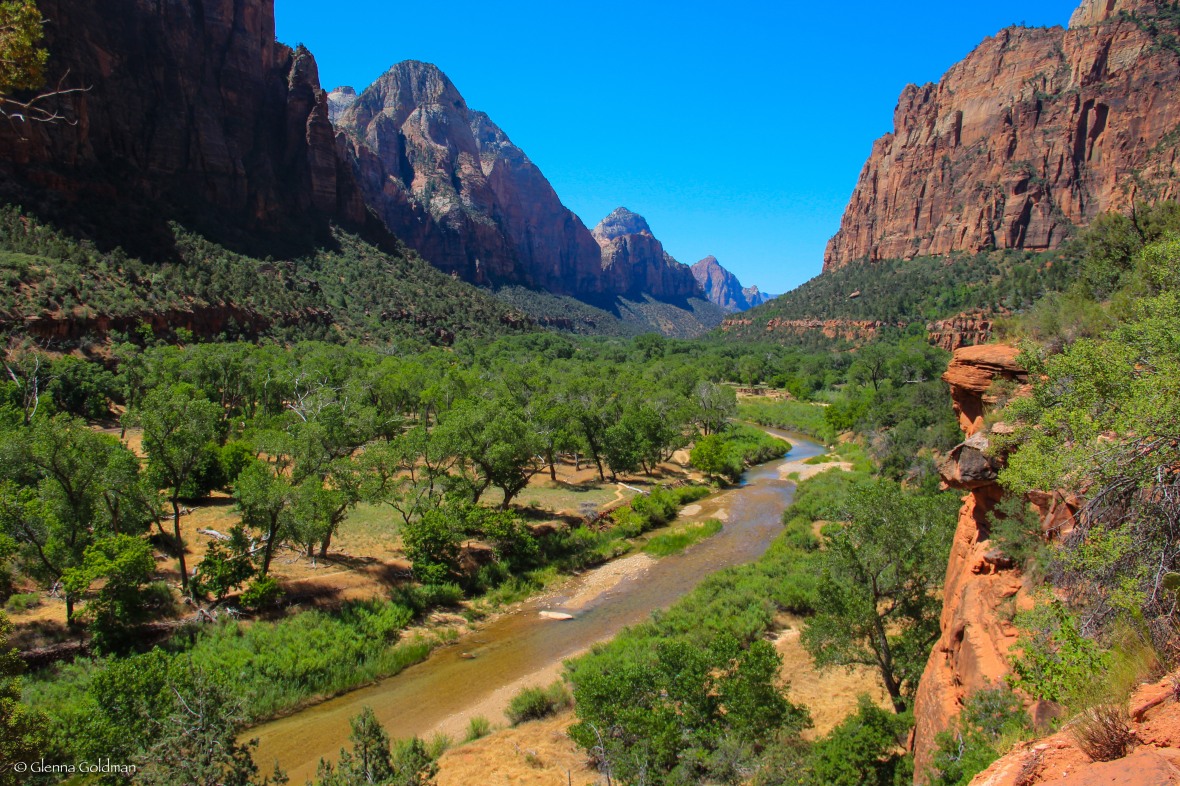 And finally, the part we’d been looking forward to for months… The Zion Narrows! This hike is listed in every book about hiking/backpacking trips as one of the best. As amazing as Zion is, this was the main reason we had come to the park.

We had a bit of trouble with our permit, which we had reserved months in advance. You can’t hike the full Narrows without one. Basically, Jake had booked the permit when reservations opened and his card was charged, but the reservation failed to go through completely (they use some sort of external vendor website for their reservations system and it was completely overloaded because they open up the permits for the season all at once), so they had no record of our permit and were entirely unhelpful about it despite us having a confirmation email. Fortunately Jake was able to get a walk-up permit instead, although he had to wait in line at 6 the next morning to get it.

We boarded the shuttle (booked through a company in town, the drive takes about an hour and a half), which dropped us off in a nondescript field. The trail wandered a few miles through cow pastures, and we startled quite a few cows as we forded the river many times to stay on trail. The open canyon started to get narrower and narrower, and the walls higher as we continued on. 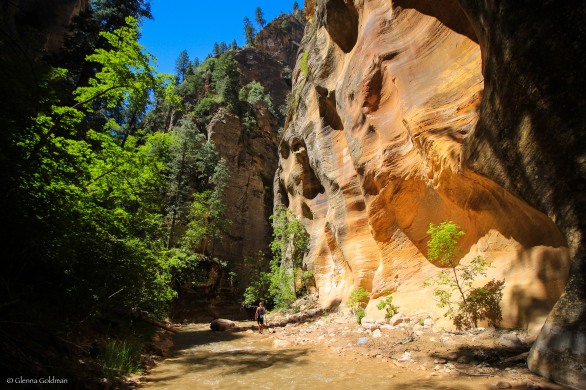 We passed quite a few campsites about halfway into the hike. They were built up on high points along the bank. We had the option of stopping at one to spend the night, but we’d decided we would rather do the full 16 miles in one day with daypacks, rather than have a full pack and stop in the middle. We found a nice swimming hole to eat our lunch, before the canyon got too narrow for good stopping points.

The canyon got darker as the walls got steeper. It was hard hiking, wading through cold water with large rocks covering the bottom. 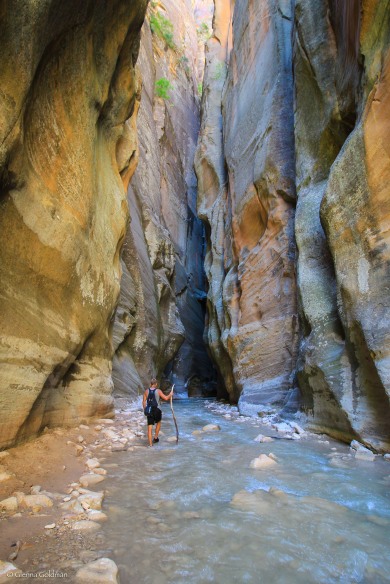 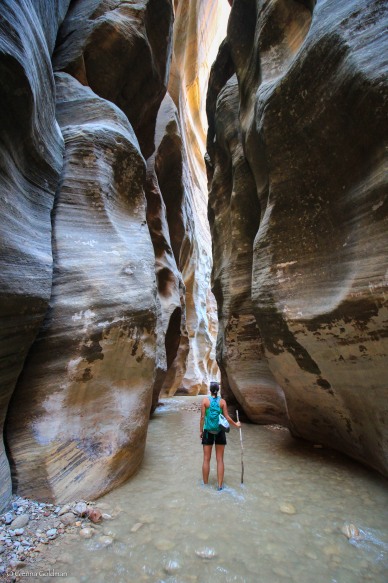 At one point the water was up to our necks. I had to lift my pack above my head to keep it from getting wet! 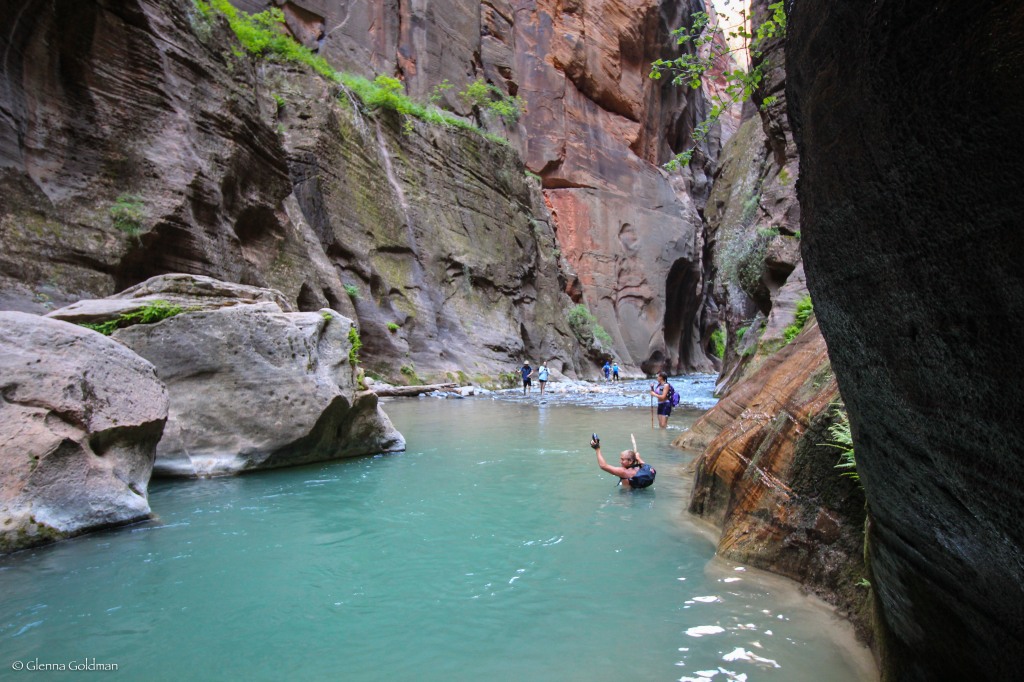 Once we got about 4 miles from the end, we began to see more people who had hiked up The Narrows from the bottom. It was a bit shocking to have so many people around, after having the canyon to ourselves for hours.

We made it! It was a very long day, and we couldn’t wait to get back to our campsite, put on some dry clothes, and chow down on some Mexican food. Oscar’s was our choice, and it was delish.

Despite the crowds, Zion was a very cool park. Next time we’ll explore the Eastern part of Zion, which most people don’t even visit. We stopped by, but didn’t have time to do much hiking.

We headed down towards Arizona, stopping at The REaD Cat bookstore in Kanab (a whole room of $1 books = heaven) and a coffee shop in Page to watch the Game of Thrones finale. We spent a few days exploring the Grand Canyon, then dropped off our bikes in Phoenix before heading to sunny San Diego! 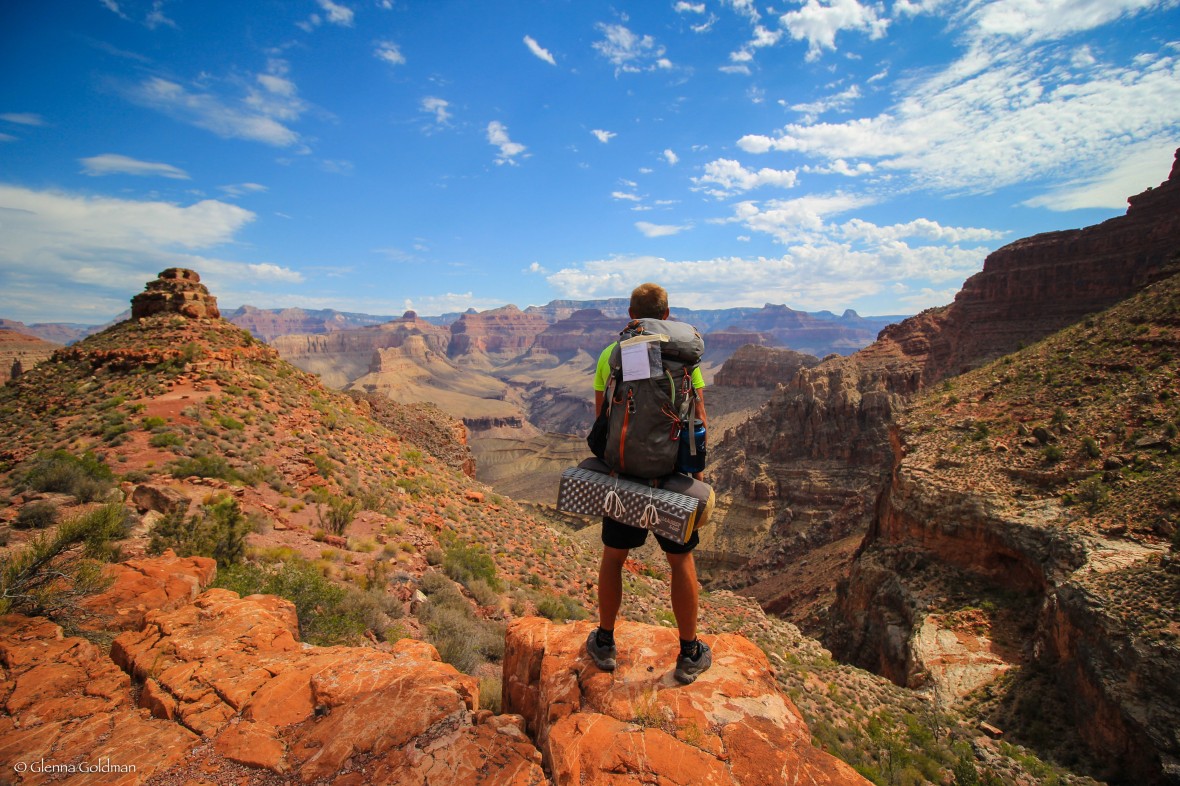