At long last, San Francisco! This City by the Bay plays such an important role in American culture, featuring in movies and TV shows, as well as news stories about innovative companies. It was a pleasure to finally be able to visit for a few days. Our very first activity after arriving was a free walking tour of Chinatown. Unlike most free city tours we’ve been on, these were given by historical society volunteers. Our guide had a vast knowledge of Chinatown’s culture and history, and we spent a few hours seeing all of the important sights, past and present.

We walked through the Chinatown market area, visited a Buddhist temple, and observed the Golden Gate Fortune Cookie Factory in action (you can pay to have a custom message printed on the slips of paper). 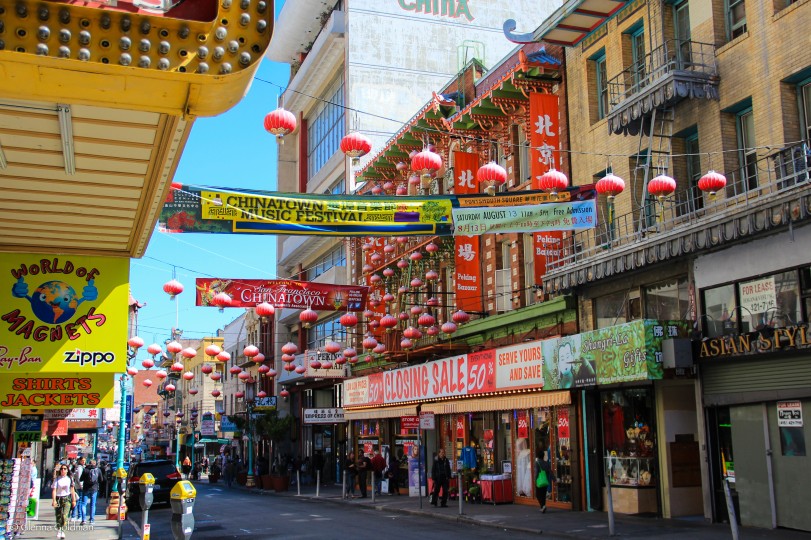 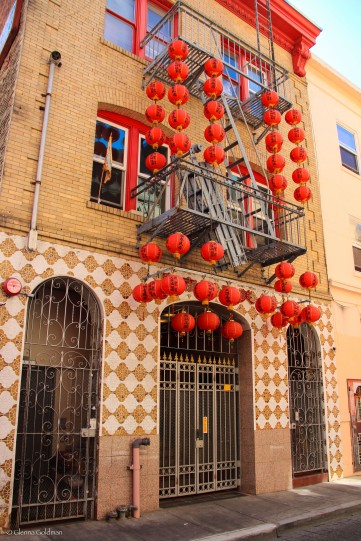 We learned about the city’s humble beginnings as a Native American village, discovery by the Spanish, settlement by the English, creation of a small port town called Yerba Buena, and San Francisco’s quick rise to prominence as a stop on the Gold Rush. Chinese immigrants began arriving to work on the railroad or mining industries, and established a community known as Chinatown.

We also learned about the many attempts to destroy Chinatown. It seems throughout its checkered history, the area has been accused of being a hideaway for gangs, prostitutes, gambling, and opium dens. Although these may all be true accusations, Chinatown has managed to hold its own and survive, despite racism and violence against its community members. A few families in power have kept a hold on development, leaving Chinatown mostly unchanged. It remains the largest Chinatown outside of Asia. It retains its own languages, customs, food… Immigrants can come to Chinatown and feel as though they never left their own country. Organizations find them housing and jobs, and they may not even need to learn English. Chinatown is reported to have the highest population density west of Manhattan, with most residents living in single-residency units, much like tenement housing in New York City. This is partly due to former immigration restriction laws, which only allowed single men into America, leaving no reason to build family homes.

Our guide also told stories of the Chinese mobsters and their exploits, many of which have been dramatized by Hollywood. Some may even exist today, but it would be hard for an outsider to find proof in such a tightly-woven community.

We followed our tour with a delicious Dim Sum meal in Chinatown. Dim Sum is a sort of buffet, where small dishes are ordered from a list or chosen off a serving platter making the rounds between tables. This manner of eating allowed us to try a lot of different dishes, instead of one entree. We walked off our meal on the way to Coit Tower, climbing hills and stairs to get a good view of the city.

Standing at 210 feet, the Coit Tower’s observation deck looked out over downtown San Francisco and the Bay. The tower was built in 1933 with funds from Lillie Colt, a wealthy woman who left an endowment to beautify the city she loved. She wore trousers, smoked cigars, gambled, and chased fires well before it was appropriate for women to do so.

We could clearly see Lombard Street (top left), but the Golden Gate Bridge was obscured in fog (top right). We had a good view of Alcatraz Island and downtown San Francisco on the other side of the observation deck. 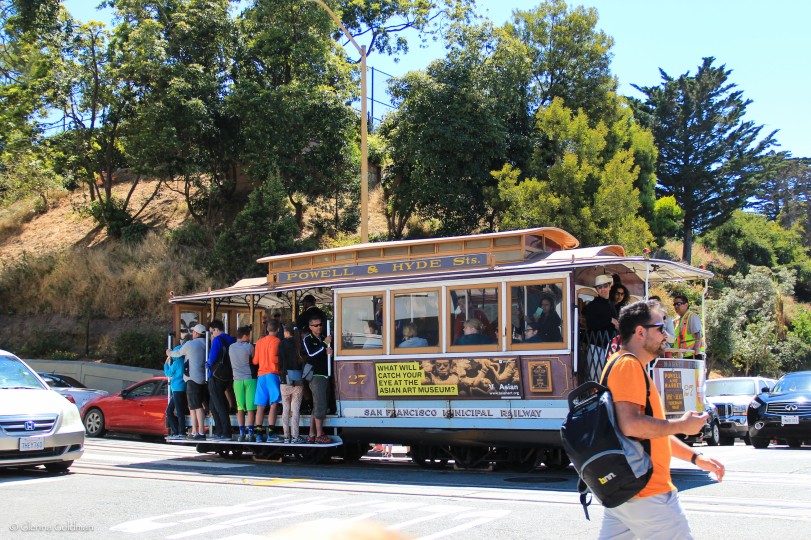 Afterward, we walked down to Fisherman’s Wharf. Unfortunately the cruise out to Alcatraz was booked (for the next month!), so we’ll have to wait till next time to see the former prison. Jake just had to find the perfect sunset shot, but that’s easier said than done in a city full of hills and skyscrapers. We found a good one at last, in a small park built high up into a hill above downtown. 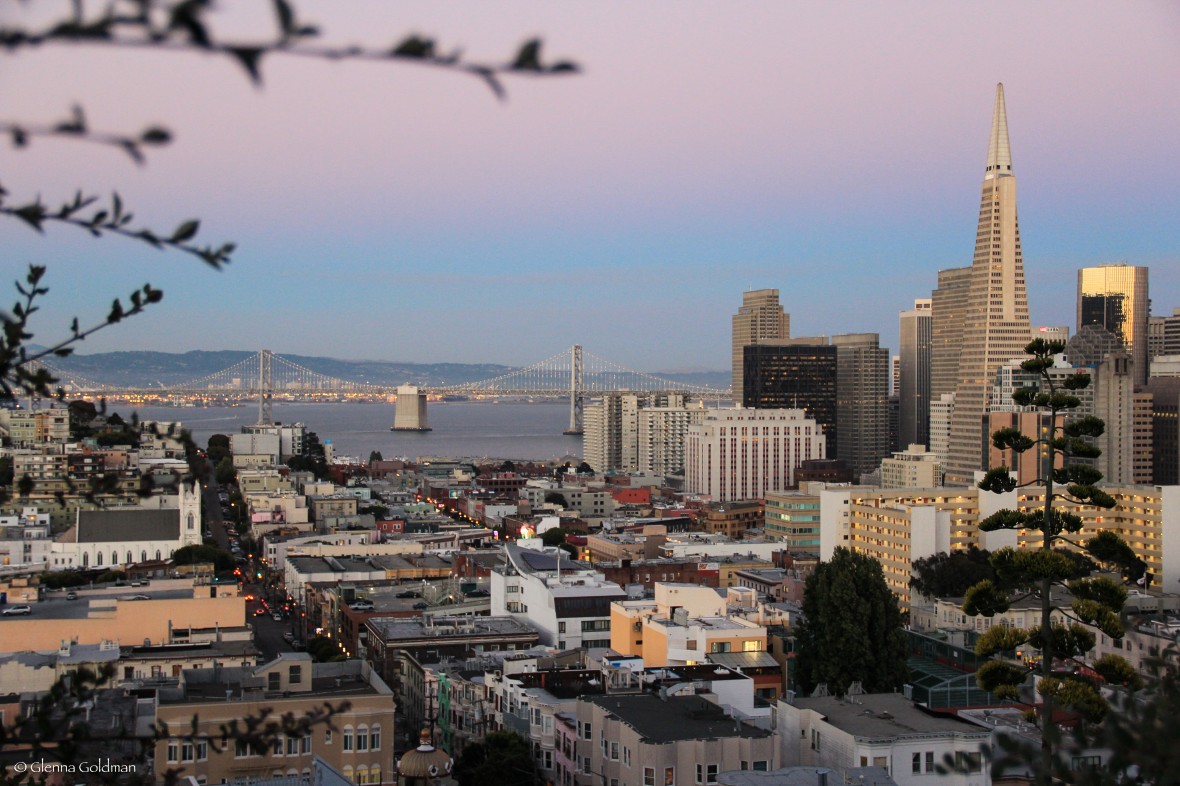 The next morning Jake and I rented bicycles, thinking it would be fun to bike across the Golden Gate Bridge. Unfortunately a lot of other people had the same idea… If you do want to cross the bridge on foot or by bike, I’d advise going much later in the day or later in the season if you want to avoid masses of people taking selfies in the middle of the walkway. Also, the most we ever got to see of the bridge was the photo below. It was cloaked in a layer of fog the entire time we were in town. We learned that warm air inland was pulling fog in from the ocean. Next time we’ll come back in the fall, and hope for that iconic view!

Baker Beach is normally a postcard shot of the Bridge.

We also visited Ghirardelli Square, an entire city block purchased in 1893 to house the Ghirardelli Chocolate Factory. The factory was moved in 1960, and the original site was put up for sale. It was purchased and adapted to house multiple shops and restaurants, while retaining the same historic architecture. The Square had multiple chocolate retail shops, as well as a variety of other boutique shops and restaurants.

The Mission Dolores is the oldest surviving structure in San Francisco. Dedicated in 1791, the Mission has survived through much political and social change. In addition to being a house of worship, the Mission provided a center for a community of ranches, hospitals, and schools. In 1810, the community around the Mission housed about 1,100 Native Americans, along with thousands of horses, cows, goats, pigs, and mules. In the 1850’s, the area became an entertainment district (now known as the Mission District). For a small donation, you can do the self-guided tour of the Mission, which includes two chapels, a small museum, and the cemetery. We found it to be quite charming. 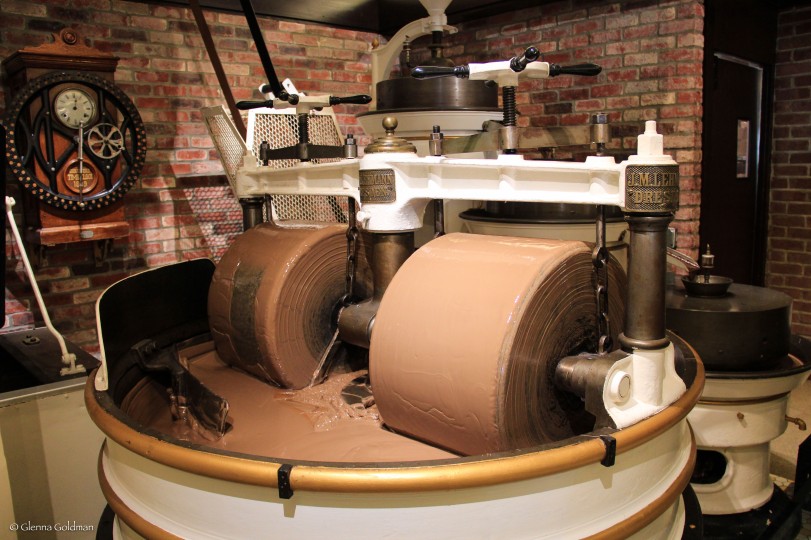 Hotels in San Francisco are extremely expensive, partly due to a 14% hotel tax. With two months to go on our road trip, we could only afford a few nights in town. Jake’s friend booked us a night at a campground next to the north end of the Golden Gate Bridge. I had no idea such a thing existed, but the northern end of the bridge lies in the Golden Gate National Recreation Area. We visited Marin Headlands, which was just as fog-covered as the bridge, but we did manage to see some dolphins! With permit in hand, we drove down to the Kirby Cove Campground. It was very windy, and I would definitely advise bringing earplugs because the foghorns are LOUD at 3am! However, the novelty of camping so close to the bridge and the gorgeous beach were a great end to our time in San Francisco. 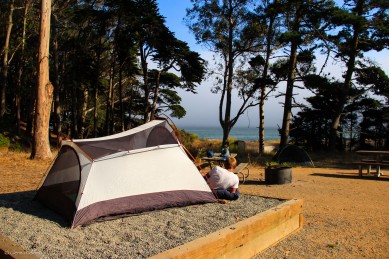 All in all, I’m glad I finally got to see such a unique city, and I’ll certainly be back to explore more of it. We stayed near Chinatown, and then down in the Mission District, but there’s so much more to see! If anyone has tips on what to see/do/eat next time, please comment below!

Next up, wine country!