I first hiked down to Havasu Falls in April of 2015. It was officially my first trip with The Traveling Geiger, and although he couldn’t make it this go around, those memories will last a lifetime. This place makes an impression on anyone who visits, and the few nights I’ve spent down in the canyon are never quite enough. I was lucky enough to return in early May with a group of friends who had never before experienced this desert canyon oasis with its awe-inspiring waterfalls, running clear with the crystal blue waters of Havasu Creek.

Havasu Falls has become Instagram Famous. Whether that’s a good thing or a bad thing is yet to be seen. What I do know is that it’s become much more expensive to visit, if you can even manage to get a permit. The first time we paid around $80 for 3 days and 2 nights in the canyon. This time it was around $170 for 3 days and 2 nights, and they charge even more for weekends and holidays. We somehow managed to get spots for 6 people – a minor miracle as permits for nearly the entire year sold out in just 3 hours. Havasupai is as spectacular as ever, but don’t expect to get it all to yourself anytime in the near future.

We spent the night at the dated but clean Deluxe Inn Motel in Seligman, about a 3 hour drive from Phoenix. We got up before dawn and drove the additional 2 hours to the trailhead. Although the last 2 hours is only grazing land for cattle, there is nowhere to camp along the way. Last time Jake and I just slept in the car at the trailhead, but that doesn’t work well with 6 people.

The hike into the canyon is long and hot. Thankfully we had a streak of cool weather, making our descent much easier. It was brutally cold and windy at the parking lot, but we stripped off our cold weather layers as soon as we hiked down below the rim. We carefully strode down switchbacks, dropping 1,000 feet in just a mile and a half. If you’re curious about the other 2 people in our party, they helicoptered in! 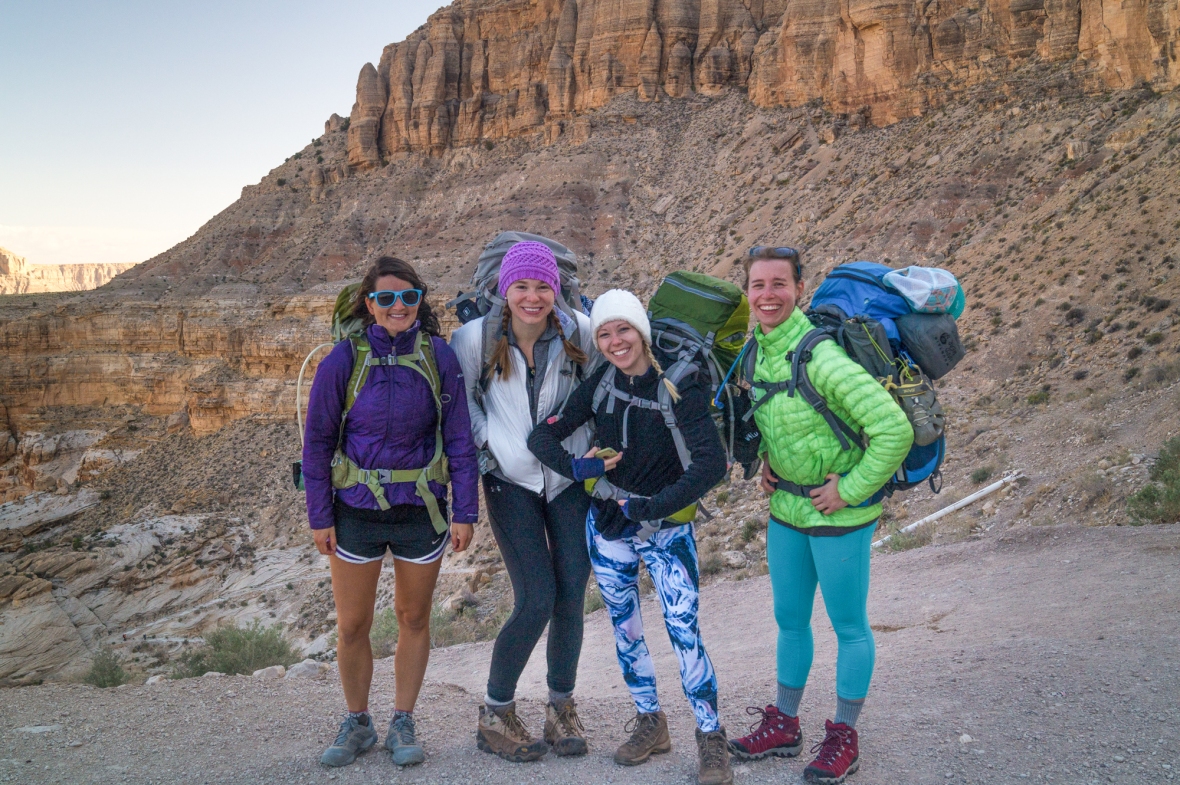 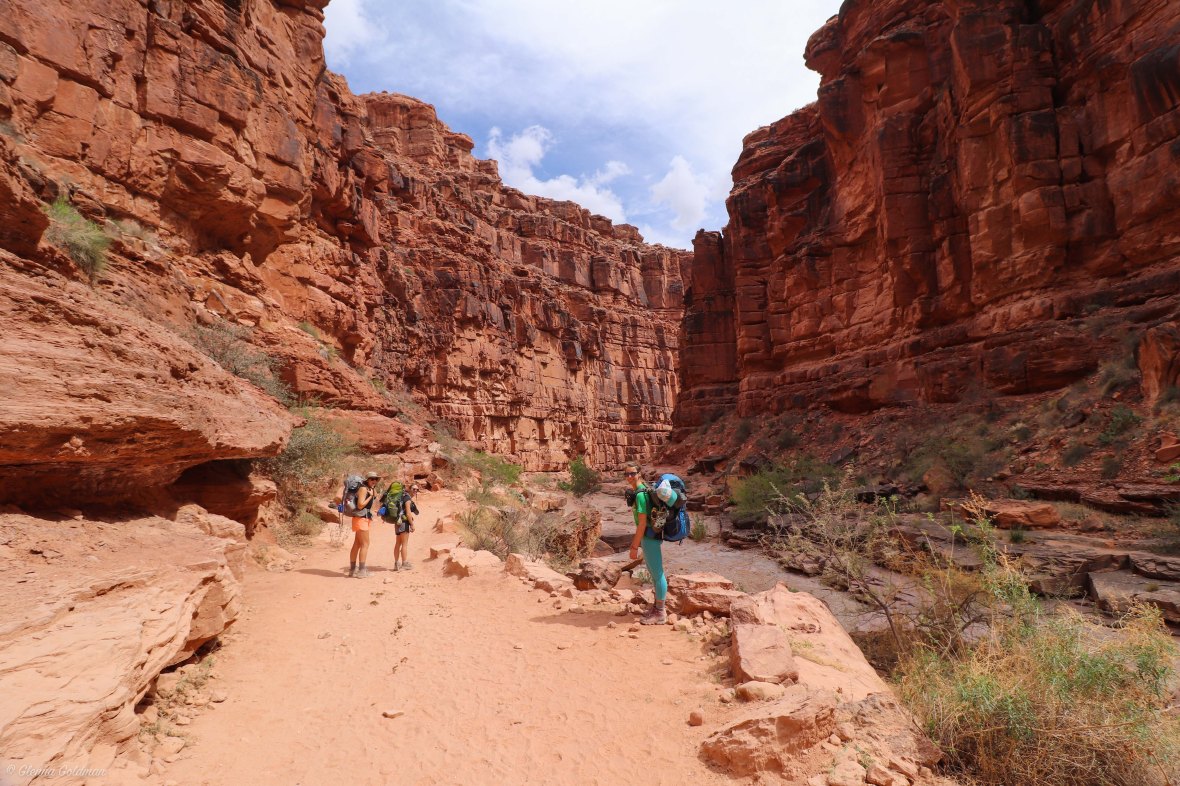 We occasionally had to step off the path for mule trains and horses. You can hire a mule to carry your pack, but we decided to save the money and hoof our gear ourselves. 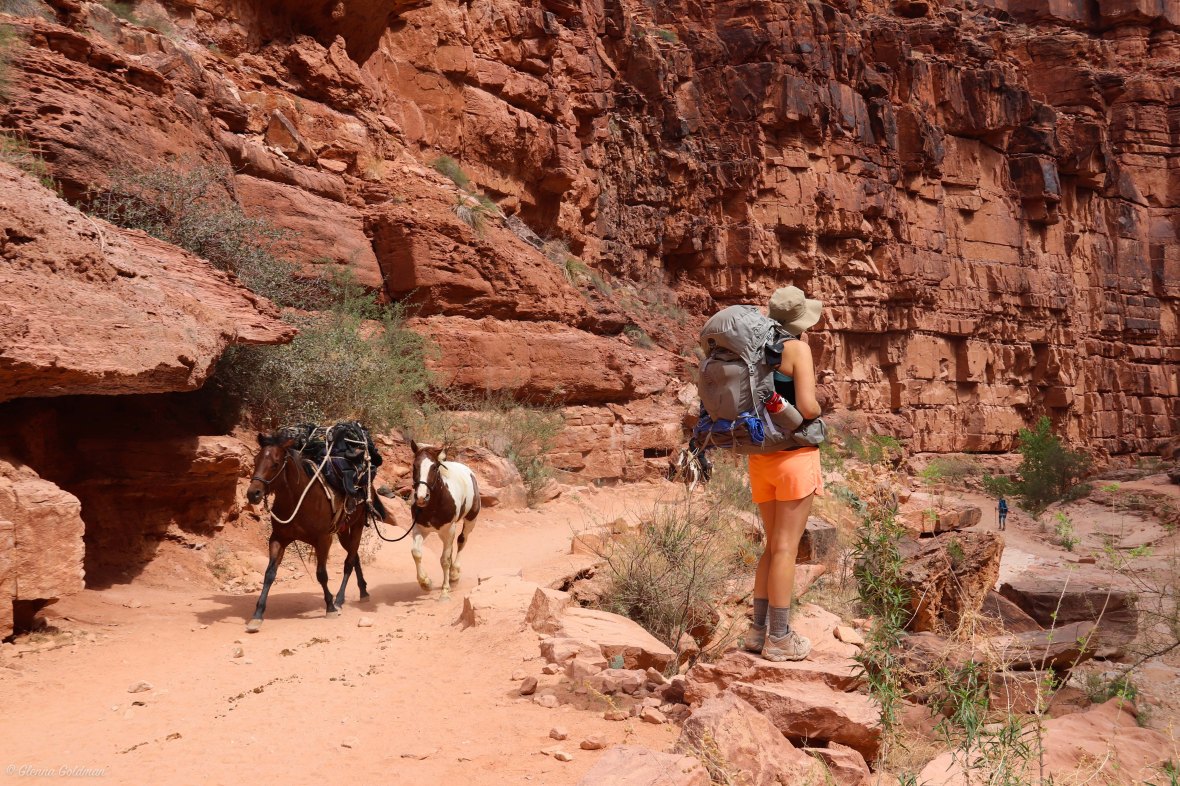 There are also helicopter rides available on most days, but I feel like you miss a lot of the experience by taking the easy way out (and in). It will set you back $85 per ride, and there are no reservations, so prepare to wait in line for several hours, even if you arrive early.

Eight miles later, we arrived at Supai Village. There are signs to the tourism office, where the permit holders check in and get wristbands for the whole group. Wear your wristband at all times, as there may be rangers checking permits along the trail and at the falls. 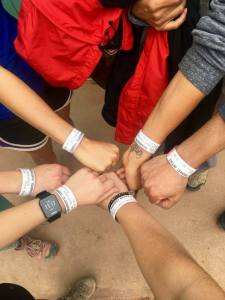 By this point we were pretty wiped, but it was just 2 miles to go! We walked quickly, as storm clouds were gathering in the distance. We caught a glimpse of Havasu Falls and took a few photos before it started to rain. 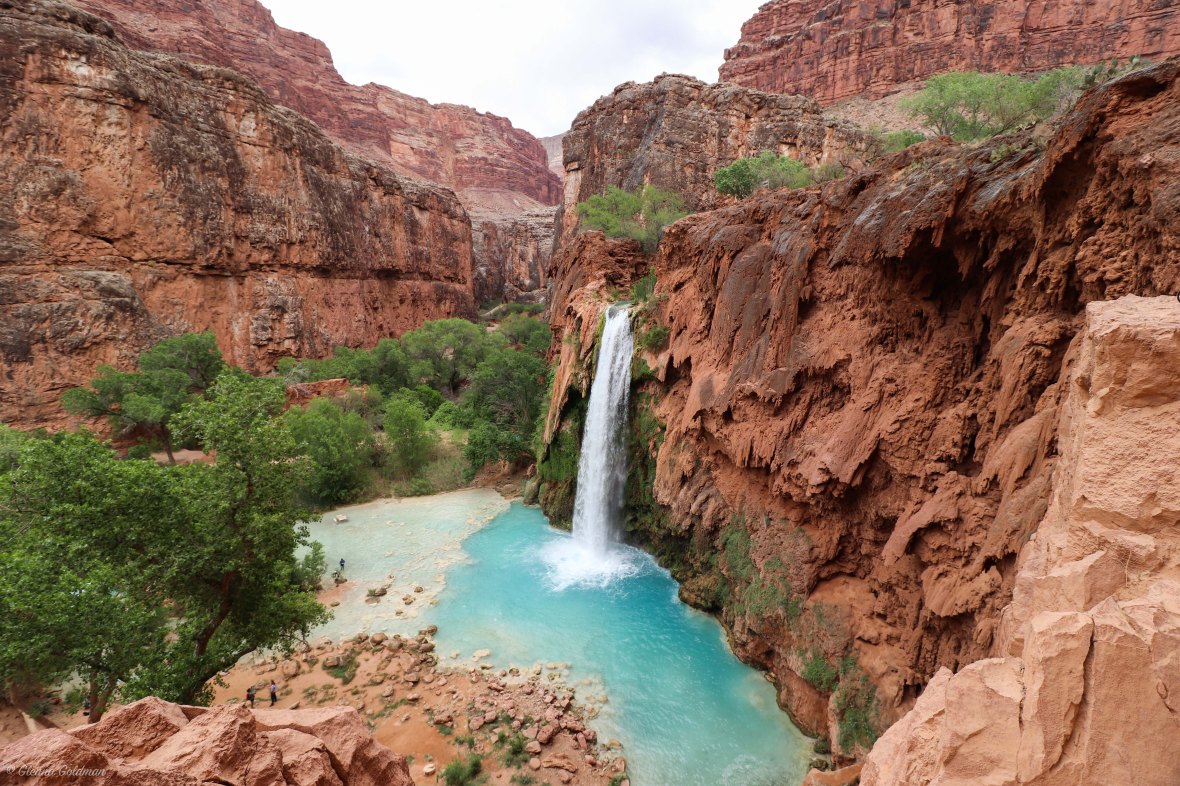 We continued on to the campground. There are about 250 spots distributed between Havasu Falls and Mooney Falls, along and between the banks of a crystal clear creek. The bridges look a little sketchy, but they’re fine as long as you watch your step.

We had trouble finding a decent spot for 3 tents, so we took one that was available and then scouted a better one the next morning. In case you’re wondering, there are 4 sets of composting toilets placed throughout the campground. There is also a spring which is safe to drink from (no need to filter!) on the end near Havasu Falls. 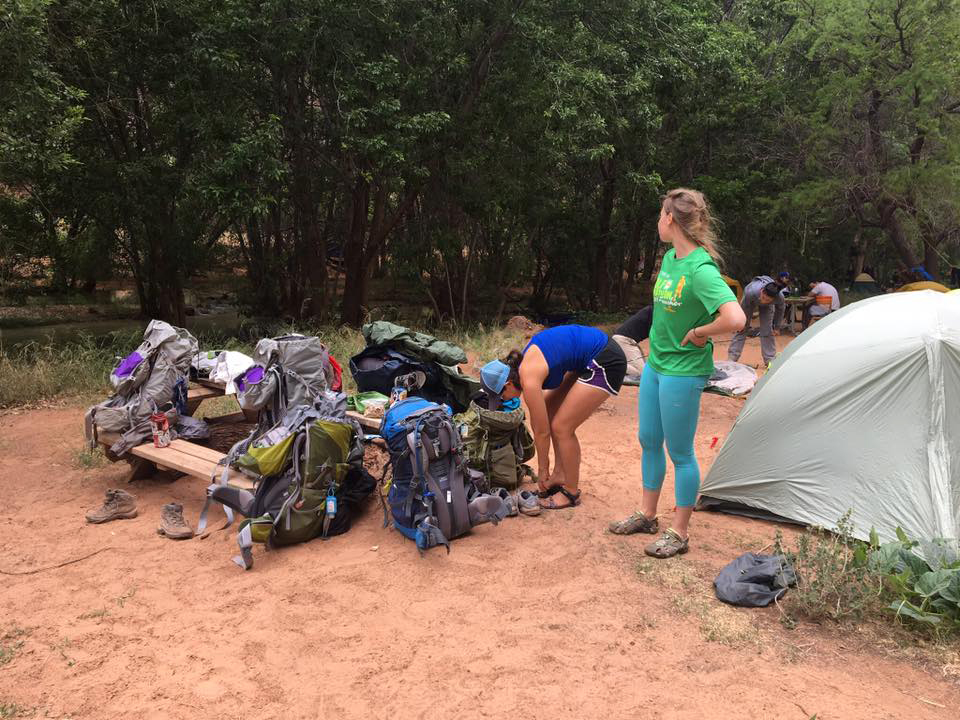 After resting up a bit and setting up our tents, we continued on to explore Mooney Falls. If you can believe it, this was once part of a small mining operation. As legend has it, Mooney was a miner who fell to his death attempting to climb down to the falls. I also read a fascinating book recently, People of the Blue Water, which mentions an attempt at building a hydroelectric power station here. Intended to channel power to Phoenix and other metro areas, all of the equipment was washed away by a flood, and the company running the operation lost all of their money. What a different place this would be if that had been successful…

Thundering almost 200 feet to the canyon below, this waterfall makes quite a roar. 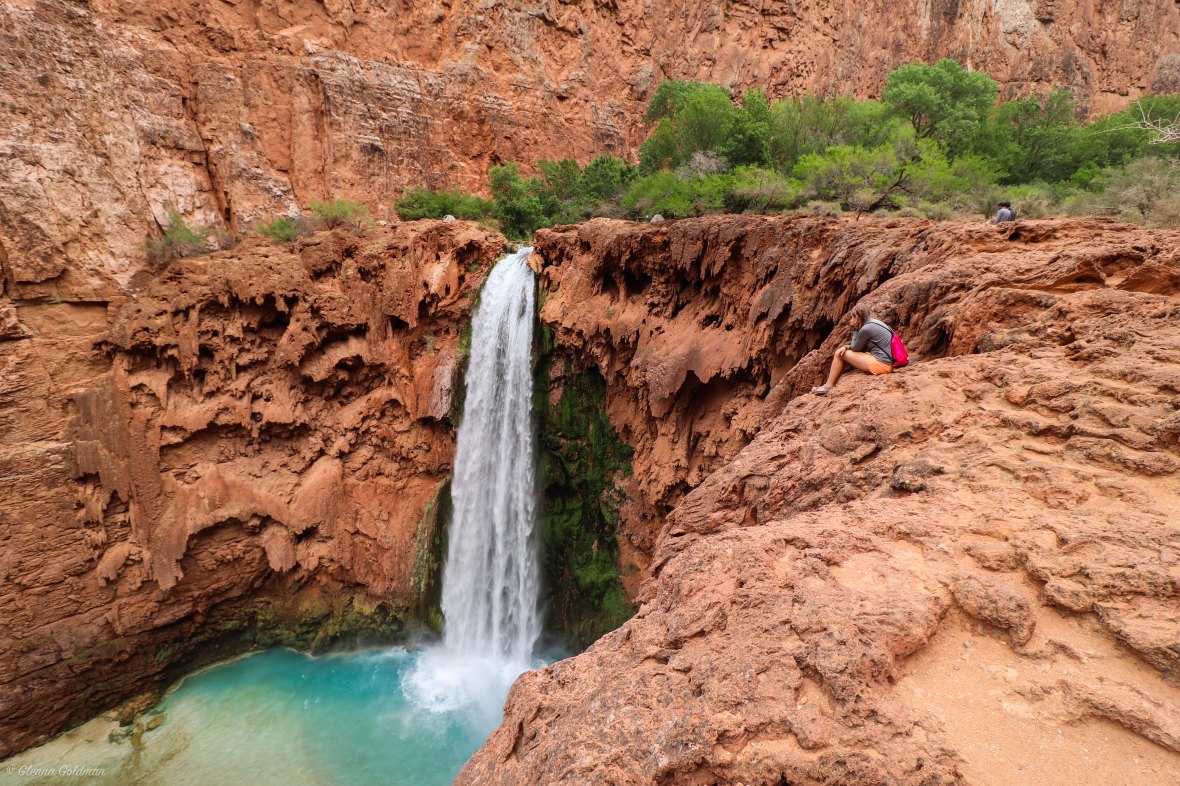 Better be prepared for some slippery chains and ladders! The route down to the base of Mooney Falls isn’t easy, but it’s well worth the effort. 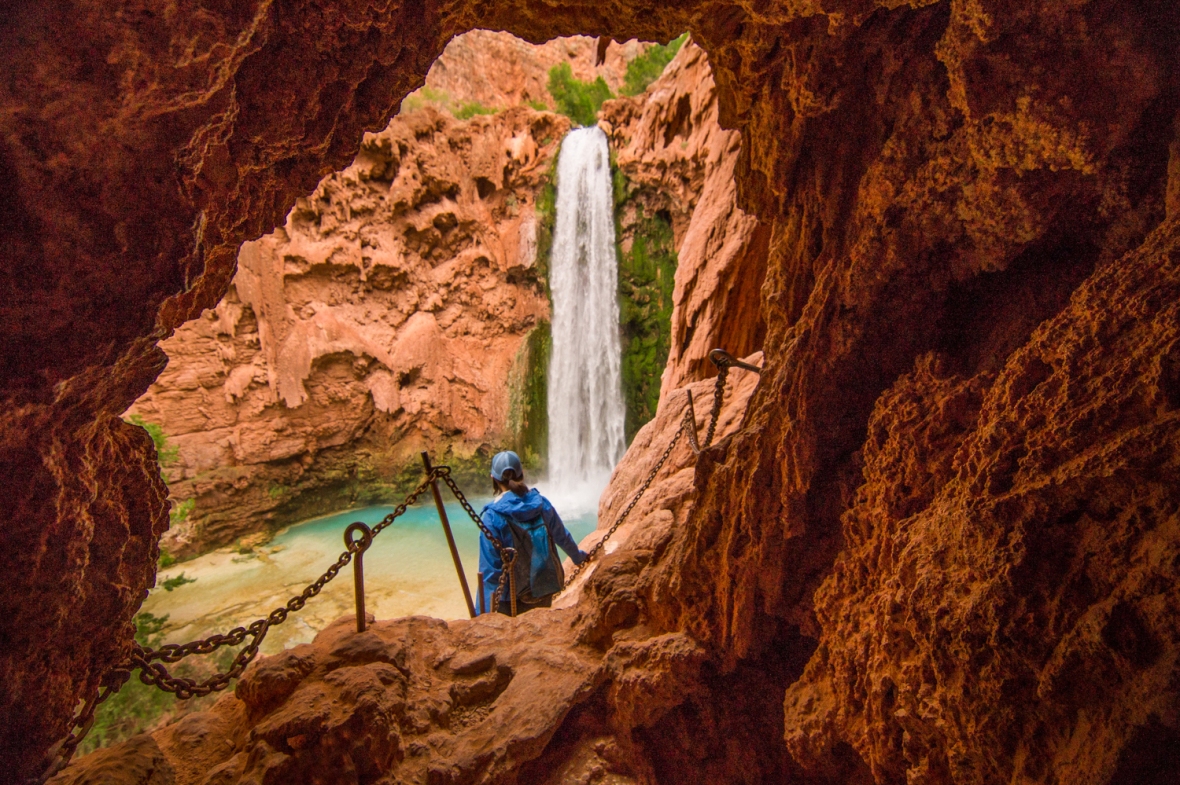 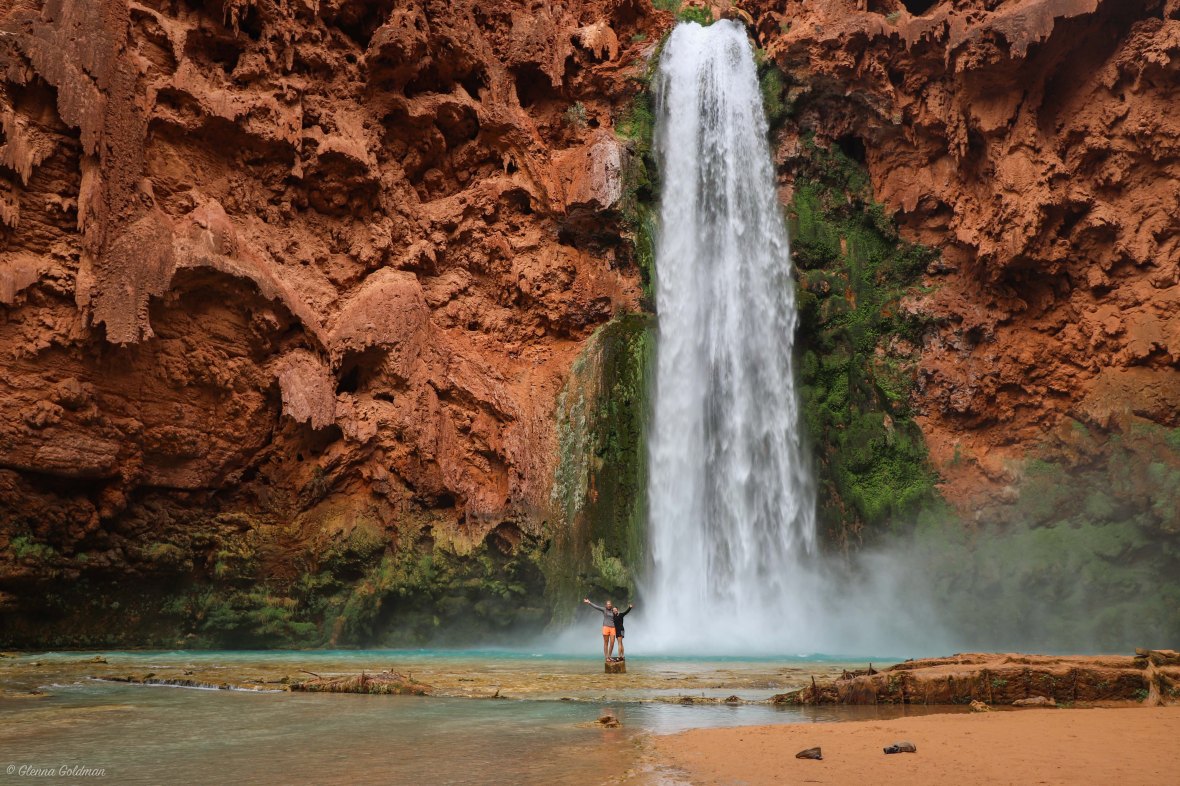 It’s hard to get the full scale until you’re standing under it! 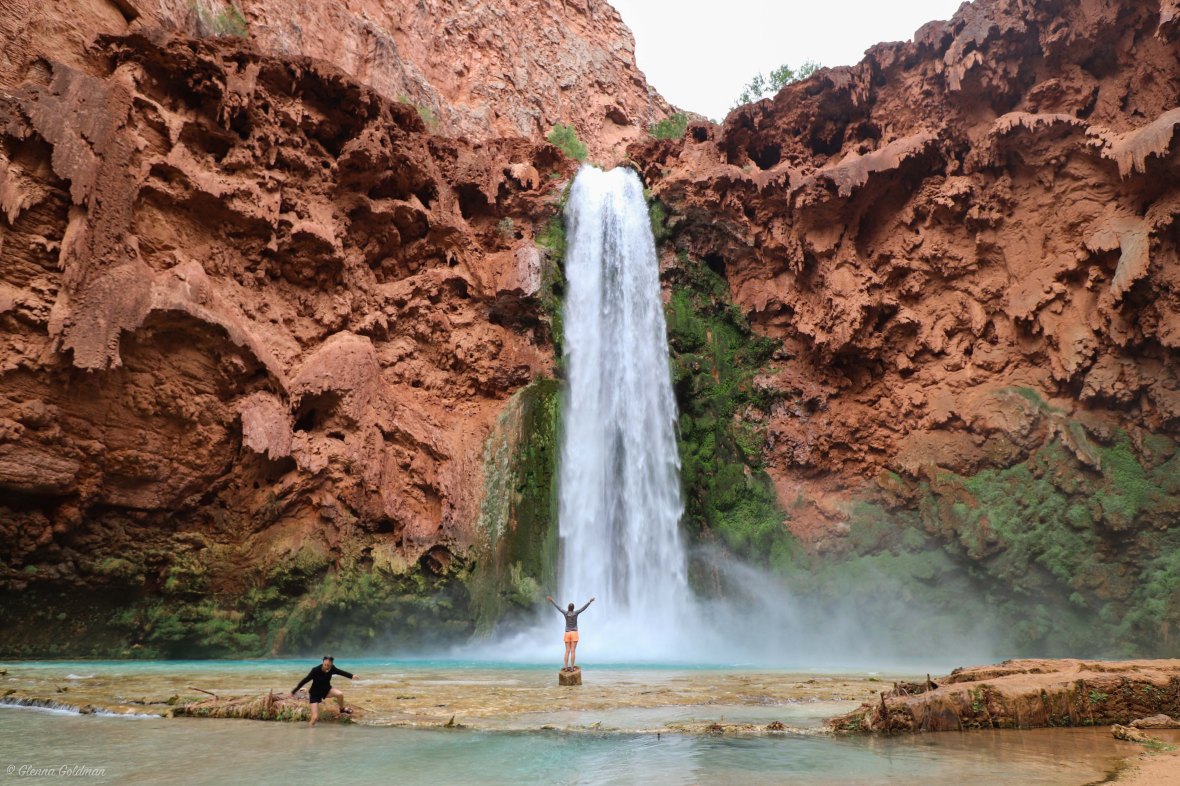 After climbing back up the long series of ladders, we sat at the top and listened to the roar of Mooney. 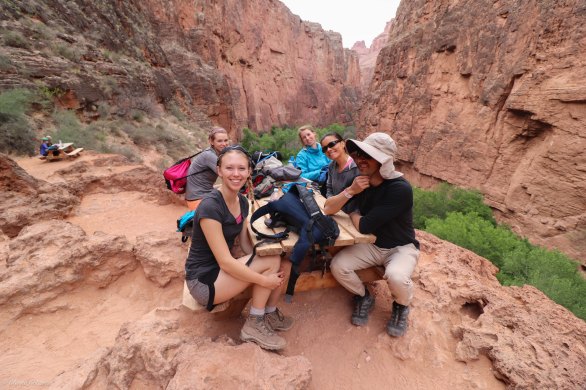 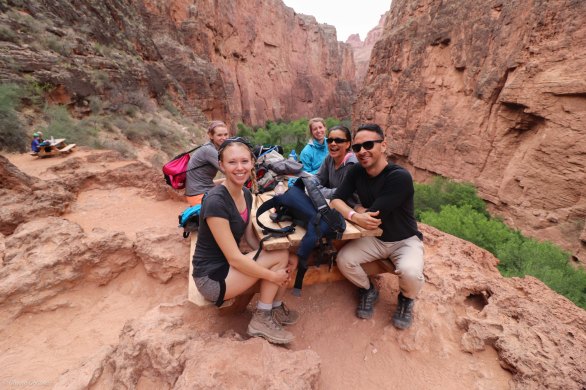 Back to camp, then every backpacker’s favorite part of the day – dinner! My new favorite backpacking meal is Backpacker’s Pantry Pad Thai. Yum!

Despite the promise of impending rain, we decided to spend the next day hiking to Beaver Falls. To get there we had to brave the treacherous ladders once more, and continue on past Mooney Falls. 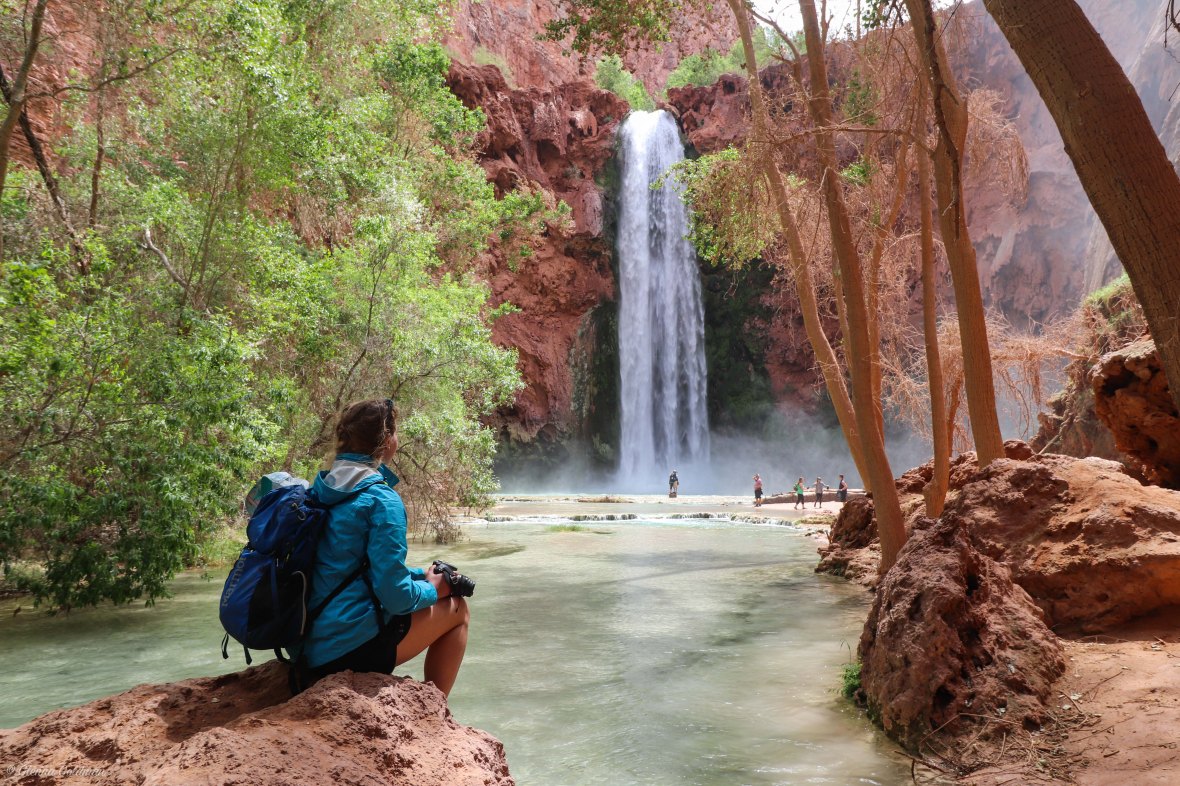 Following Hiking Hanna and Amazing Allison through the jungle! 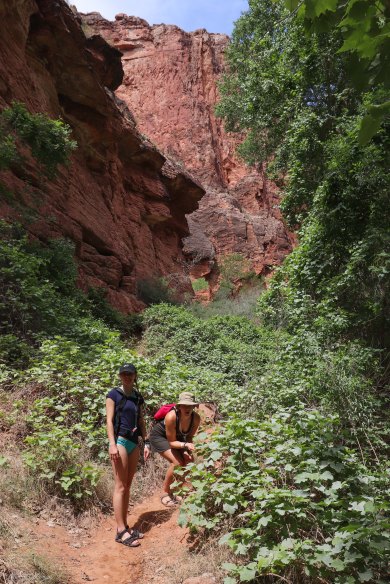 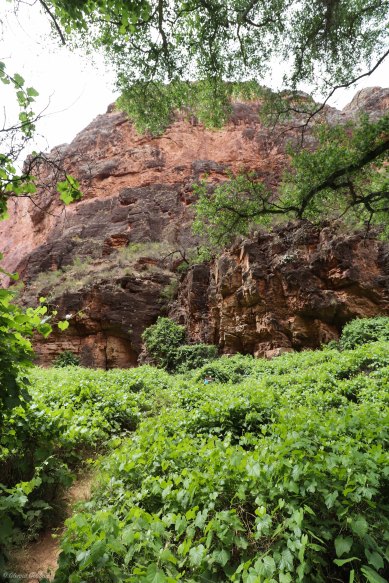 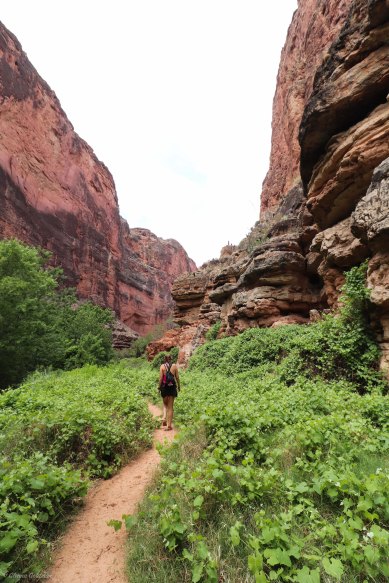 Yes, the river really is that blue. We forded it multiple times before getting close to Beaver Falls. 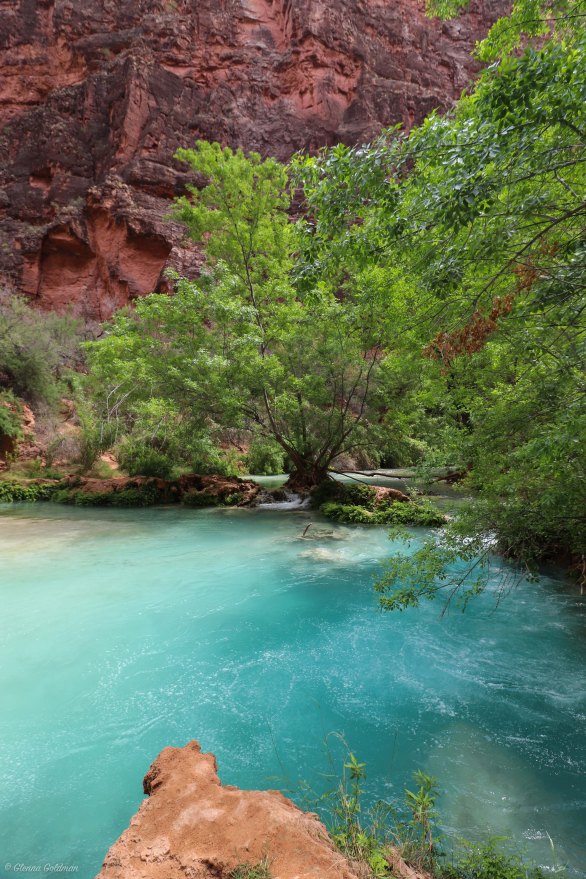 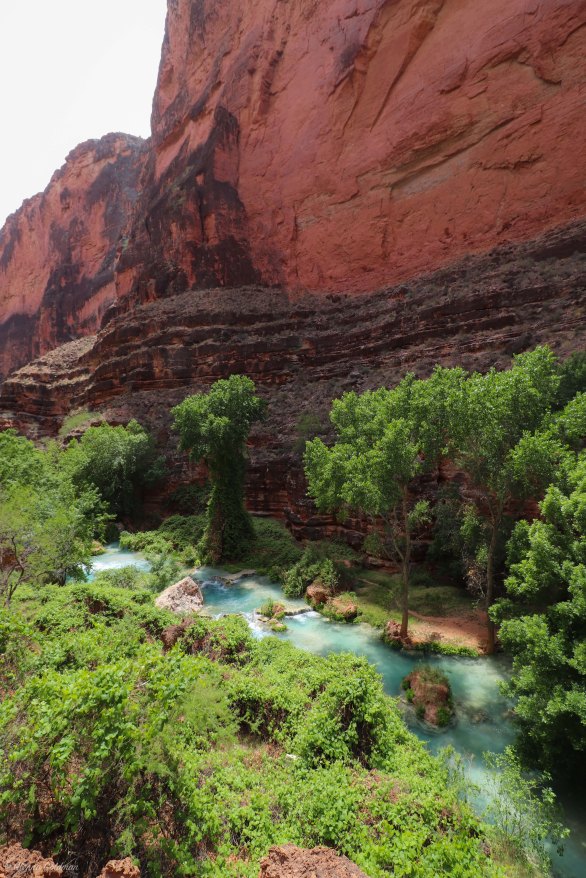 The ladders continue! At least these ones weren’t slippery. 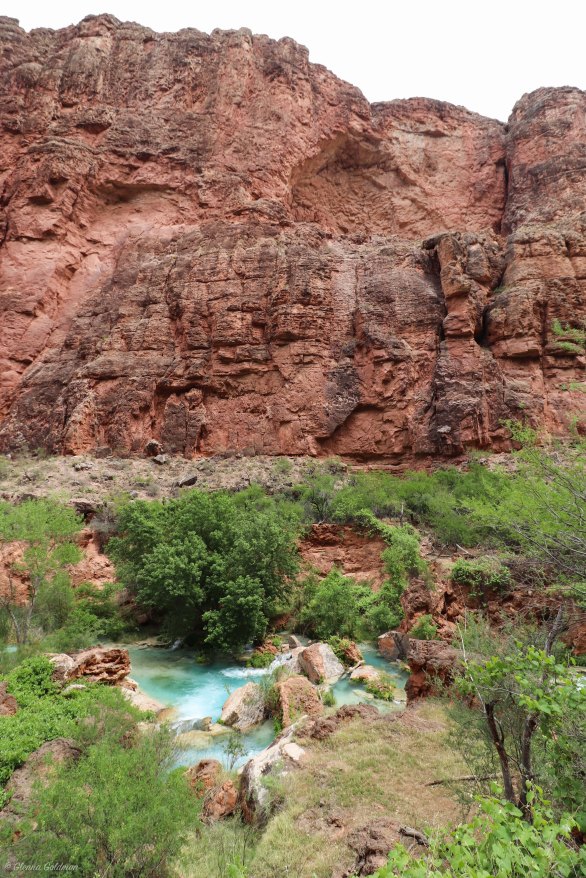 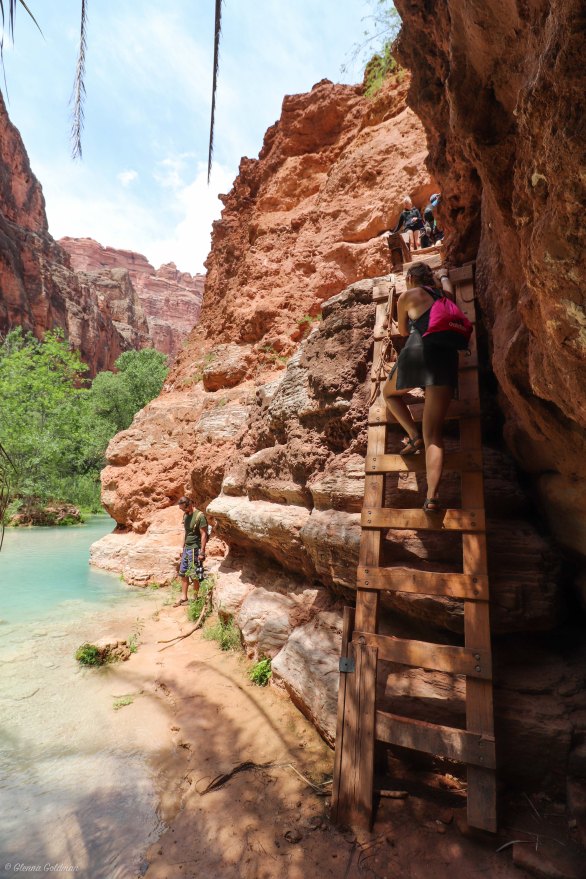 And at last, Beaver Falls! We managed to squeeze in about 15 minutes of fun before the rain caught up with us. As soon as the sun was covered by clouds, people practically leapt out of the water! The wind picked up, and it got pretty chilly. 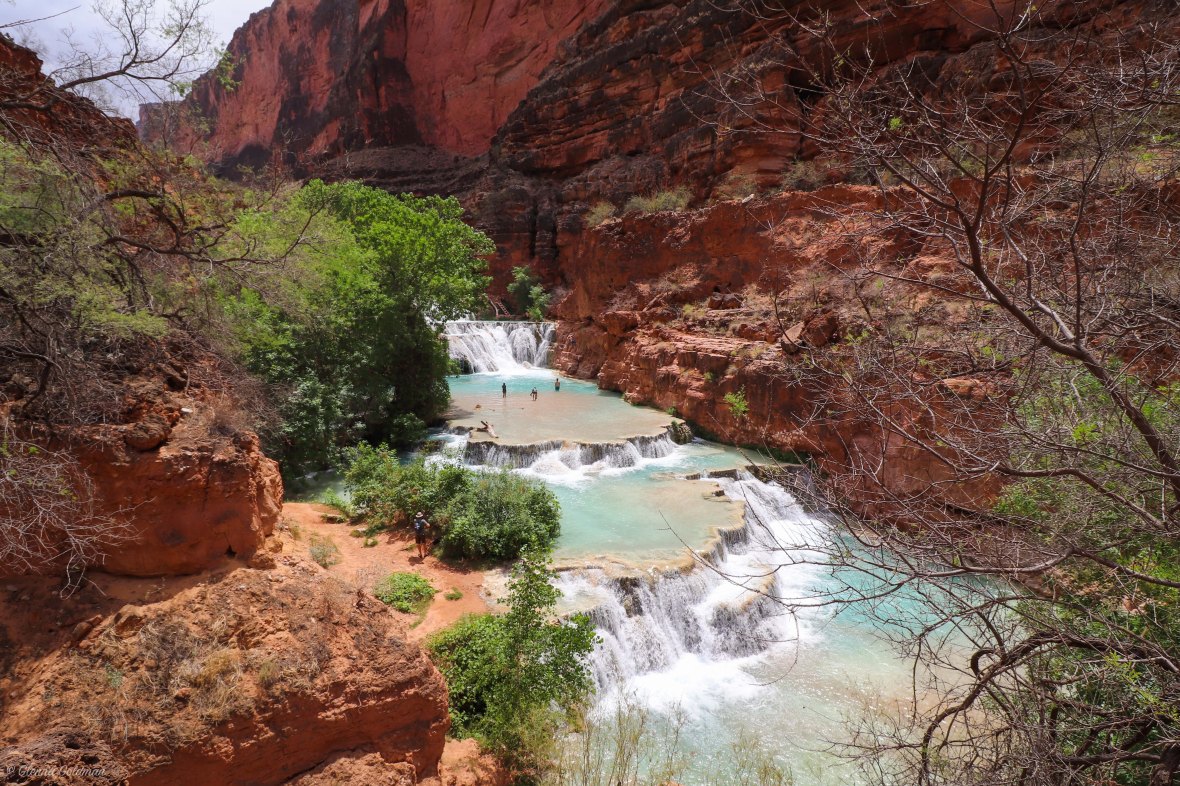 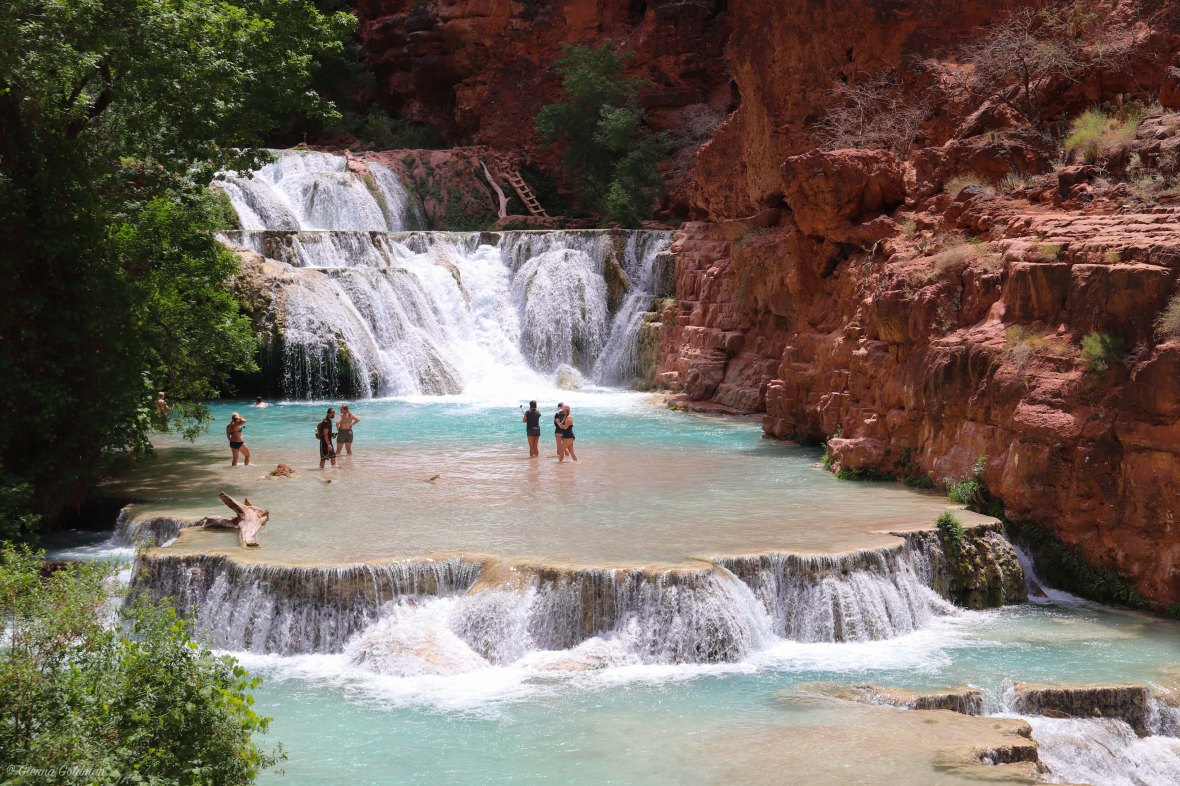 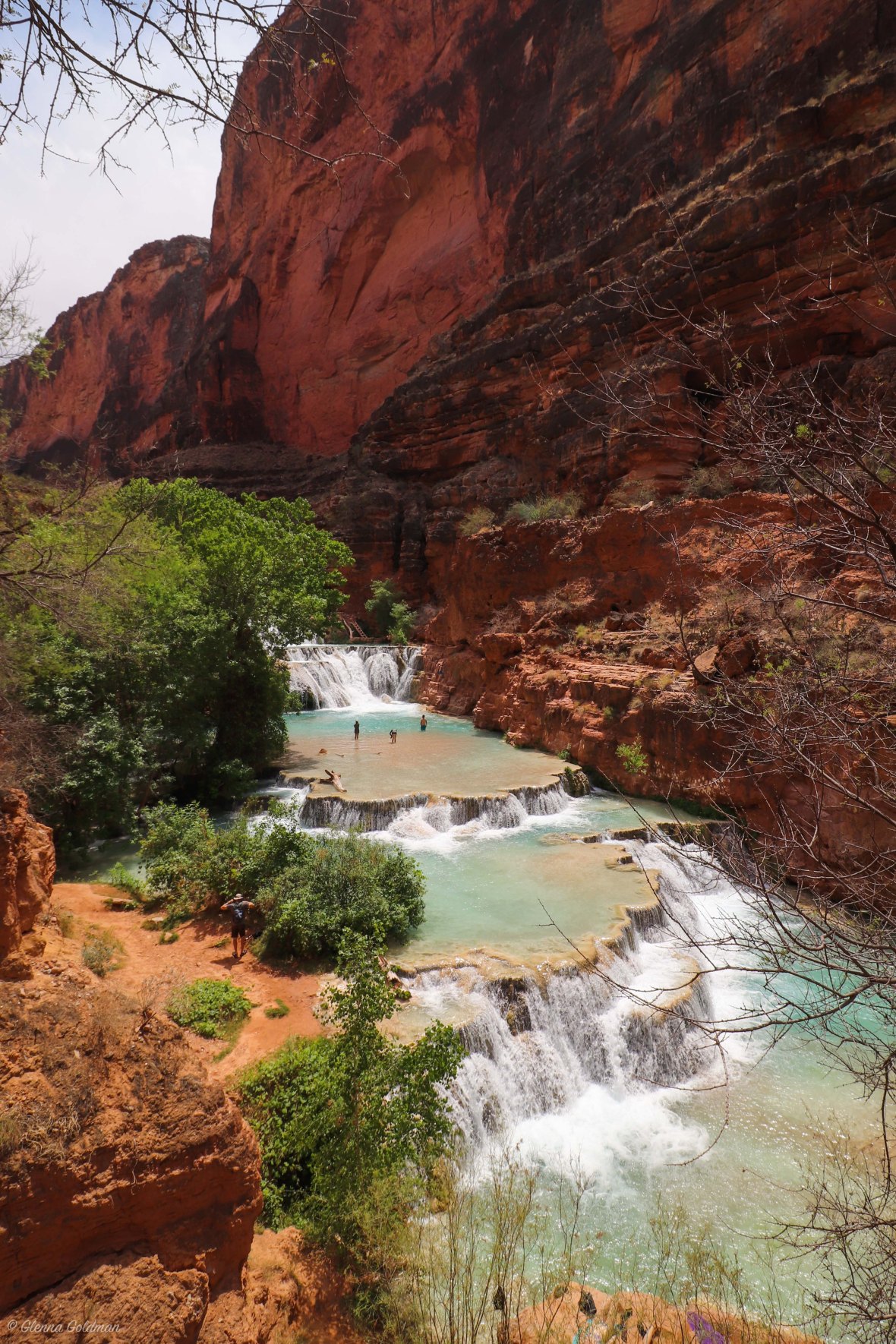 Beyond Beaver Falls is several more miles of canyon, and finally the Confluence. To see what the confluence of Havasu Creek and the Colorado River looks like, visit my Havasupai post from 2015. 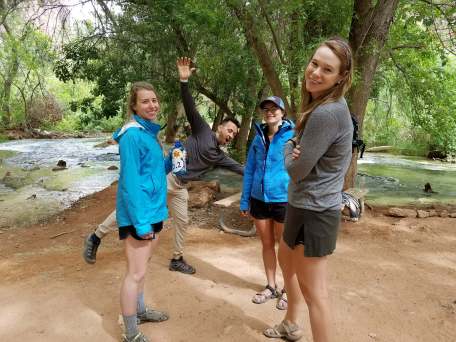 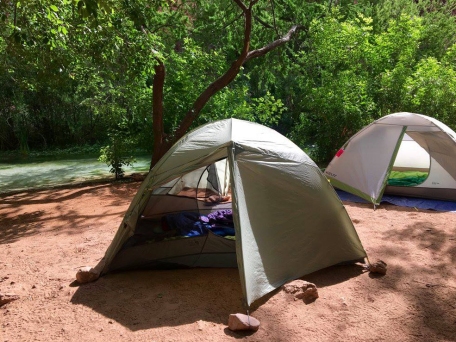 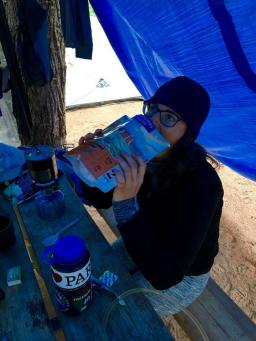 Our new and much improved campsite! Hanna and Allison hung a tarp over the table to keep out the rain.

Our final day was sunny and perfect. We broke camp and breakfasted at Havasu Falls. Andrea taught a short yoga class (extra credit for her Yoga Teacher Training?) and then posed for some shots. 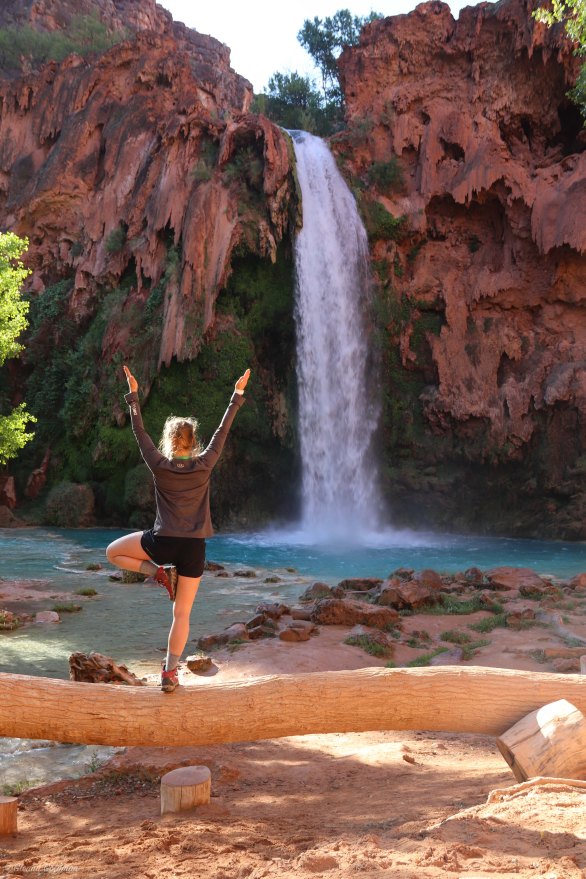 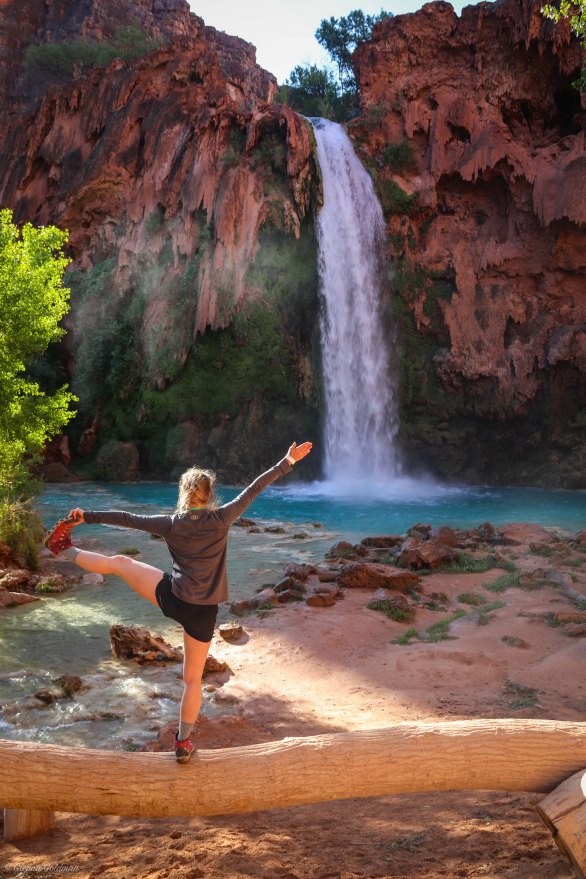 Andrea and I stopped at two more falls on the way back, while the others headed back to Supai, the village. The sun was shining, so we had to snap just a few more photos! 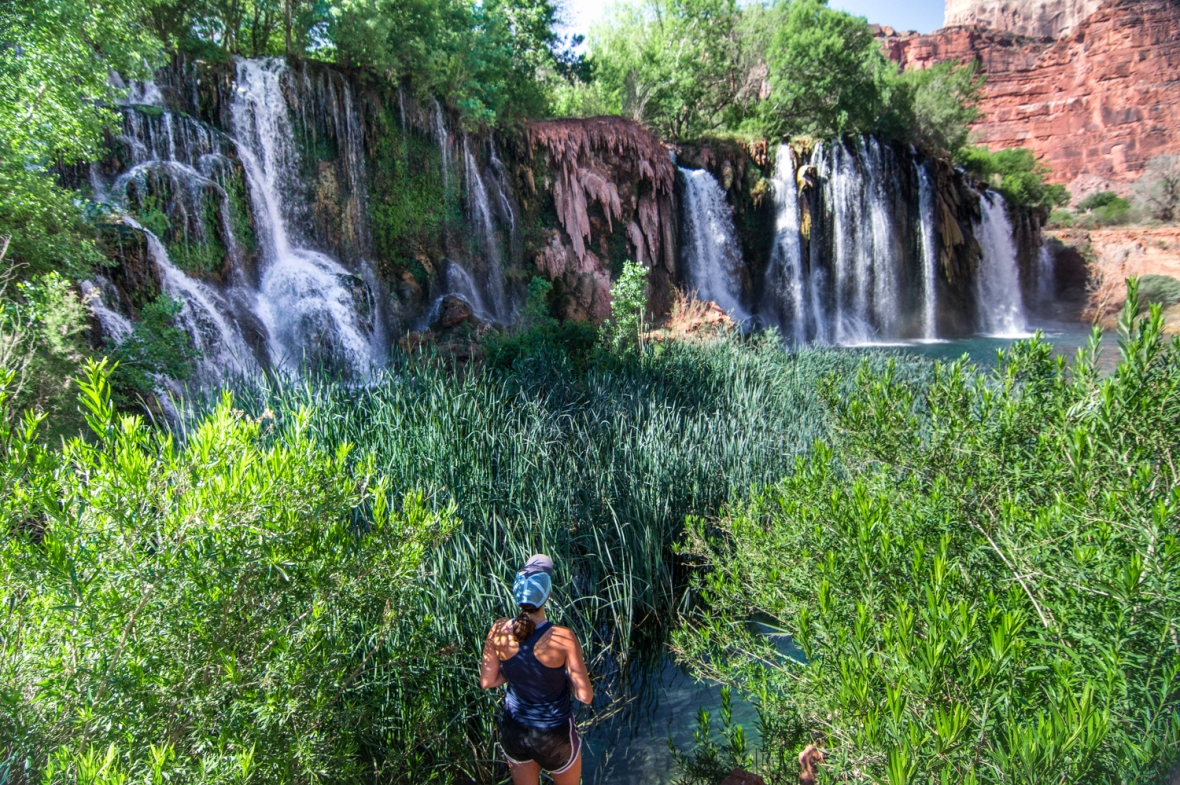 And then the long, hot hike out of the canyon. After arriving at the top, we were exhausted and ready to sit for a few hours. Those switchbacks at the end are killer!

Thanks to Allison for somehow managing to get permits, and for driving. Thanks to Andrea for letting me steal some photos! And thanks to Hanna, Frank, and Raquel for a great trip. Hope to adventure with you guys again sometime soon! #GirlsTripPlusFrank

Our next big adventure is a secret for another month or so… Can’t wait to announce what’s next!